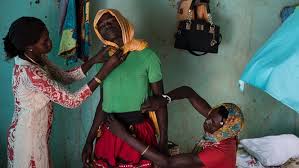 Akasha is the feature debut of South Sudanese documentarian Hajooj Kuka, Set in the Nuba Mountains in 2011, the energetic unorthodox comedy love story plays our over 24 hours in a war-torn rebel-held area of Sudan where the soldiers are keen to recruit young men to fight for their cause. Cockily charismatic Adnan (Ramadan) is not having any of it: a revolutionary both in his attitude to life and his guise as a soldier revelling in having shot down a MiG fighter plane with his favourite AK47 called ‘Nancy’. In order to avoid being corralled into the round-up (or “kasha”), he and his mate Absi (Chakado) decide to dress as women, much to the chagrin of Adnan’s long-suffering girlfriend Lina. But that’s not all Adnan, also experiments with the local weed to surreal effect in a flip and fun-loving and colourful caper that doesn’t take itself too seriously and is refreshingly anti-war. MT