Fans of Eric Clapton will certainly know the facts behind the ’god of guitar’s’ eventful life. In her flawed but emotionally penetrating rock-doc, Lili Fini Zanuck’s poignantly conveys the years of heartache behind this fated and fêted musician. 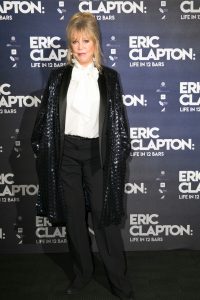 Lili Fini Zanuck and Eric Clapton are longterm friends and collaborators: He provided the score for her feature Rush, back in 1991. And despite the use of a meandering, counterintuitive narrative to tell his, often tragic, story with its ill-judged epilogue feeling more like a cheesy commercial for Clapton’s current project rather than a fitting finale, the study is mostly thorough in its breadth and depth, chronicling the life story of an Englishman who has suffered, been severely tested and has come up trumps.

Life in 12 Bars is an ironic title given Clapton’s years of alcoholism, so let’s hope this is refers to his mastery of the guitar, an instrument that was to be his muse, his whipping boy (we are shown how he uses it as anger therapy), and his saving grace throughout his life. The film opens with a fabulous account of Clapton’s early childhood, his artistic reveries and discovery, aged 9, that his mother had abandoned him: he was brought up by his grandmother Rose Clapp. We learn how Clapton turns his disappointment and rejection into developing his musical technique from his teens to his involvement in blues-based and psychedelic groups. The Yardbirds and The Cream years are covered in compelling depth, and Zanuck shows how Clapton did his bit for the blues, and was headhunted by Mayall who got him playing for the Bluesbreakers. He even moved in to Mayall’s home with his family.

But Zanuck and her writers Weintraub and Yelen tend to gloss over certain aspects of his career – probably out of respect to friendship – and it’s Clapton himself who owns up to his behavioural shortcomings as an introvert who couldn’t relate to women but became obsessed by one of them, Patti Boyd, during her mariage to George Harrison. So although the film goes into almost forensic detail on some aspects of the story, other years are befuddled – almost as if in an booze-fuelled haze – such as his career as a solo recording artist which gave rise to a several salient albums. Pattie Boyd merely serves the narrative as a flirtatious cypher who cannot make up her mind between him and George – while he is yearning for her love, howling at the moon for her to leave George, which she eventually does, but by then too much damage has been done for them to make a go of things. Talking faces are almost entirely absent to give context to this period of his life, particularly his closest friend, Ben Palmer. 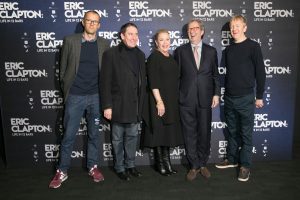 Zanuck has a cinematic way of conjuring up the days lost to booze and drugs in Hurtwood, Clapton’s country house in the depths of Surrey. But his romantic affairs take on a rather hazy anecdotal feel, the story often flipping back and forth – and there’s a curious bit where Zanuck suddenly goes back to his mother’s second rejection of him, arriving from Canada with her two latest children, and this comes towards the end of the story, father than at the beginning, where it would have clearly better informed us of The emotional arc that coloured his career. Clearly this fundamental rejection was going to lead to a lack of trust and vulnerability issues that would go on to jeopardise any kind of lasting romantic attachment. But it’s these years that are so movingly conveyed by Zanuck, showing Clapton heartbroken over Boyd after dedicating Layla to her, and retreating into a ‘safe’ world blunted by drugs and alcohol. But there’s much to enjoy here in this freewheeling trip back to a rich and vibrant musical era. And it’s heart-warming to see how Clapton has finally managed to overcome his demons, albeit circuitously, and despite a rather cheesy ending which actually has the strange effect of making the legend seem less interesting than he appeared to be at the beginning of his career. MT