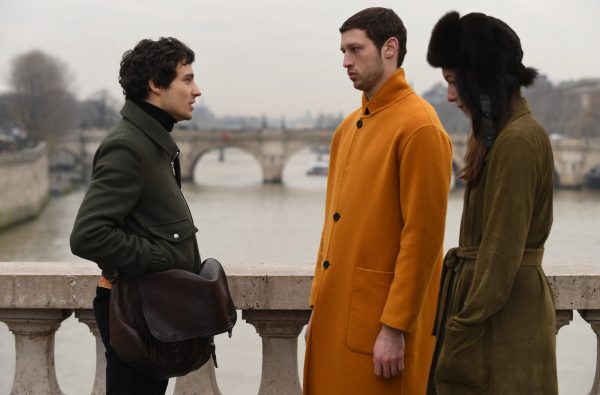 Israeli auteur Nadav Lapid’s third feature is an incendiary portrait of psychological trauma. The trauma of a man on the run from himself. It also works as a migrant’s story, and follows an exiled Israeli soldier who fetches up in Paris determined to forget the past and forge a new future. There’s nothing new about the expat-in-Paris plot line but Lapid brings a refreshing physical energy to his drama making it absurdist and at times exasperating, but ultimately entertaining and watchable, though slim on plot lines and a bit too long.

Tom Mercier is the unpredictable hero in this chaotic affair and exudes a high octane energy that propels the film forward though its highs and lows. Some scenes are engaging, others ridiculous and banal. Mercier’s physical presence alone is a force to be reckoned with, well-muscled and lean he conveys violent unrest and also vulnerability, best in the scenes when he takes his clothes off, as he often does. In one burst of action, he jumps up on a table and does a striptease to Technotronic’s club anthem “Pump it Up”. In another he endures a humiliating nude photo shoot for an off-the-wall artist, who pays him cash.

We first meet Yoav making his way into in an empty apartment in the fashionable Rue Solferino. where he strips down and has a bath before realising his stuff has mysteriously disappeared in the night. Passing out in the cold, he is revived by wealthy bon-chic bon-genre neighbour Emile (Quentin Dolmaire) and his musician girlfriend, Caroline (Louise Chevillotte). They provide him with clothes and money, and become entranced with his exploits taking him under their wing. Yoav immerses himself in the French language, desperately seeking work and surviving on a spartan daily diet of pasta and tomatoes. The characters of Emile and Caroline are never really explored in great depth and are just there serve the narrative representing the ennui of the classic French upper class. Their bourgeois inertia contrasts with the young Israeli’s emotional turmoil. He’s a character straight out of the holocaust: a scalded cat who’s jumped out of a fire. And we feel for him, despite his unease. The film’s entire focus is on Yoav and his maniacal attempts to make something of himself, and obliterate the past. You can take the boy out of Israel, but you can never take Israel out of the boy, and his homeland remains very much a part of his subconscious, especially when he secures a job in security at the Israeli consulate, where the memories of past trauma are re-lived. It seems that Yoav can never escape from himself, and that’s the crux of the film. Wherever we go to find happiness and freedom, we will always come full circle to meet ourselves again. Yoav seems hellbent on raging a war against his own demons. But by finale sees him finding a modus vivendi in the French capital, so the film does have a happy ending of sorts. DoP Shai Goldman, heightens the frenetic energy in long medium close-ups and handheld camera sequences that push things to the limit making this a challenging watch. Lively music choices, high fashion and Paris itself all contribute to this daringly vibrant displacement drama. You may feel bewildered, but you will not feel bored. MT