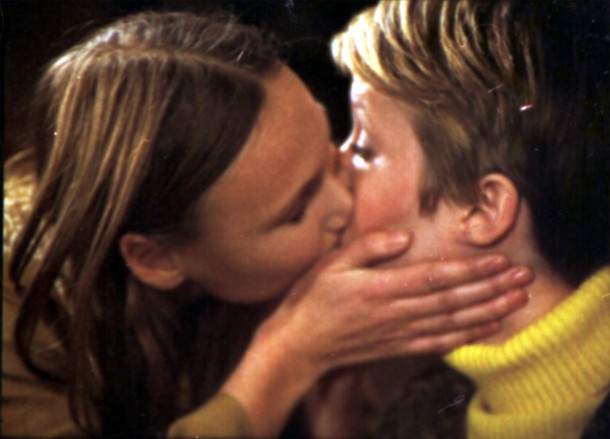 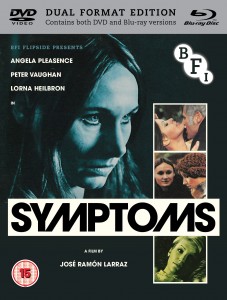 Symptoms is a British horror film directed by Jose Ramon Laraz normally known as a director of exploitation movies with arresting titles such as The Violation of the Bitch, Whirlpool and Deviation. However the effective Symptoms is a much more subtle and nuanced production for Laraz.

Helen (Angela Pleasance) invites her girlfriend Anne (Lorna Heilbron) to an English country mansion house for a holiday. Some time back a young woman Cora (Marie –Paule Mailleux) was murdered and dumped in a lake in the woods. Brady (Peter Vaughan) is an odd job man who lives and works locally. He begins to intimidate the two women. And from the attic come noises at night.

The pleasure of Symptoms is that it’s a character study where no back history is provided. In Hitchcock’s Psycho, a glib analytic explanation of Norman Bates’s behaviour is given, only to then be shattered by Norman’s final motherly grimace. Symptoms deliberate omission of reasons for mad behaviour allows the film to journey inwards in a pure and non-didactic manner. Symptoms is slow, measured and appropriately shocking when the story demands. Laraz is no Hitchcock but he displays considerable skill in creating atmosphere whilst carefully restraining his direction.

Laraz had an early background education in art history, which probably accounts for the convincing set design. The house has a gothic appearance without being over-cluttered by disturbing artefacts. Great care is taken with the lighting and Laraz allows his camera to often pause on the disturbed Helen to produce eerie compositions (One such reminded me of the painter Fuseli). The film is beautifully photographed by Trevor Wrenn. With its muted colours, Symptoms could be described as a pastoral take on Polanski’s Repulsion. I suspect Laraz was also aware of the work of Ingmar Bergman, Kummel’s 1971 vampire film Daughters of Darkness and Clayton’s great ghost story film, The Innocents.

The women’s repressed lesbianism is pleasingly understated. One Kiss. One touch. One brief hallucination. All remind you of moments of desire in Bergman’s Persona. And though Symptoms is a psychological horror film it does have its ghostly frissons – the startling appearance of Brady at a window. Yet influences aside, Symptoms never feels derivative, but manages sensitively to adapt tropes and themes to powerful effect. Even when the film occasionally ventures into scenes of normal village life it avoids being clunky.

John Scott provides some very effective music – employing flute, harp and minimal piano that enhance the story. However such character driven horror movies stand or fall by the quality of their performances. Symptoms has exemplary casting. Angela Pleasance (possessing eyes as haunted as her father, the actor Donald), Lorna Heilbron (with dykish short hair) and Peter Vaughan (such malevolent body presence) are all excellent.

Symptoms was once on the BFI’s list of most desired, but now lost, British films. Thanks to a Belgian archive we again have a print. Symptoms is a fine horror movie for those who don’t normally like horror. For those of us who do it should be warmly applauded as an honourable contribution to the genre. Alan Price.

NOW AVAILABLE AT A BFI FLIP SIDE RELEASE | DVD AND BLURAY