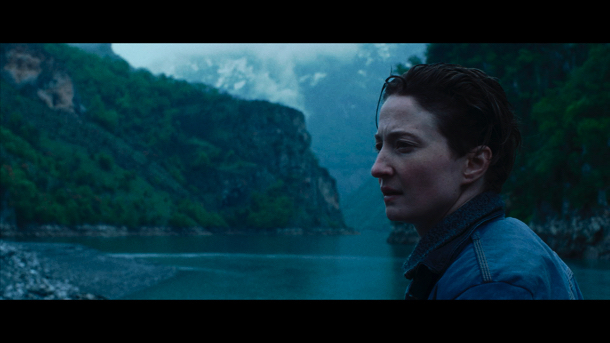 ‘Swearing Virginity’ is an ancient practice that still exists today in remote areas of Albania. Young women sacrifice their physical and emotional freedom in order to enjoy the privileges and rights only accorded to men, who enjoy complete independence and command the respect of the womenfolk in their community .

In Laura Bispuri’s sensitive feature debut, the sworn virgin in question is Hana Doda, played convincingly here by well-known Italian actress Alba Rohrwacher (Best Actress at Venice last year for HUNGRY HEARTS). As ‘Mark’ Doda, she eventually decides to leave her mountain home and seek refuge and a new life with her sister Lila (Flonja Kodheli) in Italy, after spending a decade of deprivation in a mountain village.

In Milan life feels very different for ‘Mark’, as she gradually adjusts to the modern world and a future of freedom, while constantly revisiting her painful past, seen in flashback. Feeling awkward and alienated by these new surroundings, it is never full explained why she continues to use her male name and dress as a man after arrival in their home. Teenage niece (Emily Ferratello) realises that things are not normal, despite her mother’s protestations to the contrary, and appears understandably hostile and questioning. Lila’s husband also seems to treat ‘Mark’ with a certain degree of frostiness, particularly when he sees the sisters experimenting with a new bra. It is only when she meets a life guard (Lars Eidinger) at the local swimming pool that Hana’s female longings start to awaken and her femininity blossoms.

Laura Bispuri adopts a less is more approach to her slow-burning narrative: dialogue is minimal, both in Italian and Albanian, and a stark steely blue aesthetic lends an aura of sombre frigidity to the narrative, keeping the tension simmering while details slowly emerge as the film unspools. SWORN VIRGIN is Based on a novel by Albanian writer Elvira Dones, the medieval practice stills survives today in backward mountain areas where brides are taken fully veiled by their husbands so they are unable to find their way back home. A bullet is included in their dowry by the bride’s father, just in case they fail to please their intended spouses. MT