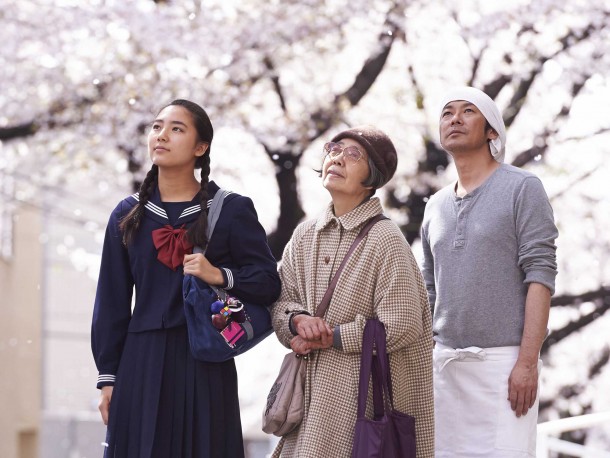 Naomi Kawase’s light domestic fare was served up at Cannes Un Certain Regard sidebar in 2015. Adapted from Durian Sukegawa’s novel, AN is a freewheeling ode to the elderly that is tasteful and modest in its ambitions and intimate in its scale. It focuses on an old lady in her late seventies who is a dab hand at cooking, and particularly at making a sweet red bean paste that sandwiches together the pancakes that are called dorayaki in her native Japan. AN won’t frighten the horses and is the sort of film you might enjoy on a Sunday afternoon with your great aunt or grandmother, or a small child. The message here seems to be that life is not only enjoyable in the slow lane, but there is much to be gained by looking and listening and savouring that often gets left out, to our detriment, in the busy modern world.

Tokue, played by veteran actress Kirin Kiki (also seen in Still the Water) applies for a job in the local dorayaki shop run by  soulful manager Sentaro, played calmly by Masatoshi Nagase (Mystery Train) Despite a rejection on the grounds of her age, Sentaro then hires Tokue on the strength of her cooking skills and lives to sees his business really take off with her help and support. The dramatic punch comes when it emerges that Tokue has suffered a form of Hansen’s disease (leprosy) and this sets the cat amongst the pigeons in the close-knit community. Kawase’s subtle narrative points at a life of harmony; mindfulness is very much the way to go. Delicate visuals of blossoming cherry trees link this idea to the healing power of nature but sometimes AN verges on the twee, outstaying its polite welcome with a discrete yawn, even for old ladies and tiny kids. Others might find it a charming way to relax and learn to make these delicate pancakes. MT