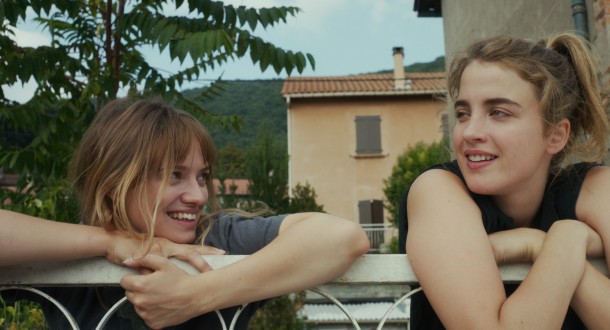 After the death of their mother, sisters Suzanne (Sarah Forestier) and Maria (Adèle Haenel) grow up with their father Nicholas, a truck driver (Francois Damiens).  Suzanne is impetuous from the beginning, living in a dream world, whilst her sister is less self-centred, helping  her sister adjust to life’s problems. At seventeen, Suzanne gets pregnant, an absent father means that Maria has to help out. But soon she is the sole provider for little Charlie, since Suzanne has fallen for Julien, who goes from robbery to drug smuggling during the course of the film. Suzanne, helping him in the first stage of his criminal career, acquires a criminal record.  But the death of her sister catapults Suzanne (finally) into adulthood, and for the first time she takes responsibility – not only for herself.

Katell Quilléveré (Love Like Poison) crams a quarter century of the life of Suzanne into just over 90 minutes of her second feature film: When we see her at first, Suzanne is playing innocently with her little sister near the grave of her mother. When we leave her with Leonard Cohen’s song of the same name, we either love or hate her – and the same goes for the film. Quillevéré does nothing to make her heroine sympathetic, on the contrary, Maria and (sometimes) her father carry the emotional load Suzanne leaves them with. But still, we fall for her all or nothing approach to life. Somebody once said, there must be more than everything to life, and this is exactly Suzanne’s motto. She lives purely for the day, emotionally driven: she is a wild child-woman. And absolutely oblivious to reality or duty, she races through life on self-centred emotional roller-coaster, often at the expense of others.

Sarah Forestier as Suzanne carries the film, which could have easily been an awkward mixture of TV drama and sentimental story-telling. But her Suzanne is real, and so are the settings: the ugly hotel rooms, the father, who is king of the road but lacks emotional understanding, and the dullness of prison life. The camera is lively, bordering on hectic, showing a realism, which sometimes reminds us of the Dardenne brothers. Nothing is artificial, we get what we see. It is Suzanne trying to transcendent an ugly life by sheer emotional force. There are obviously gaps in the narrative, but such is real life and Suzanne is such an emotional tornado, that we soon forget the missing parts. The second film is the most difficult, but Quillevéré storms, like her heroine, through all obstacles with an overpowering emotional and aesthetic force. AS

SUZANNE IS NOW OUT ON DVD