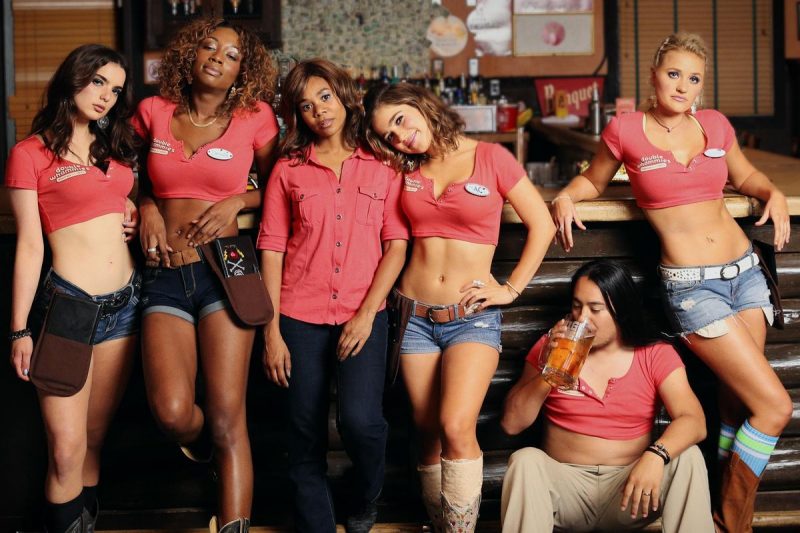 Set in a joint called Double Whammies, run by a largely absentee owner, it features a cast of skimpily clad women waitresses although the real work is done by Lisa, who keeps staff and customers at bay. We meet Lisa Conroy (Hall) already distraught before her day begins. She has too much on her plate: a rotten marriage, an interfering boss and a rapid staff turnover. Her deputy Dannyelle (McHayle) and the boisterous Maci (Richardson) have to keep staff and customers happy, they range from flirtatious to downright rude, and get two minutes attention per table, and you may touch a customer, but not squeeze him – one of the rules Lisa tries to get over to the ingénues of the day.

One of the waitresses has problems at home, another was mixed up in an attempted robbery of the place. And today, they discover a would-be robber in the ventilation pipes. He is wedged in, and Lisa has to call the cops to have him freed – and arrested. Then the sound system breaks down. But that it is not the end of Lisa’s woes: the TV system is down too, and there will be no wrestling matches on ESPN for the mainly male clientele. But Lisa puts the angst of the future behind her – at least for the time being – because the present has too many problems. All the male characters are a misogynous bunch, let alone a butch lesbian (DeLaria) who supports the crew.

DoP Matthias Grunsky’s camera is very intimate, but also conveys Lisa’s isolation. The feature is dedicated to ‘Mothers’ – and while Lisa may be childless, the rest of her crew definitely qualifies, all shouting their frustration from the roof of the ManCave building: they remain indomitable and Regina Hall is outstanding in this breezy and understated comedy of survival. AS