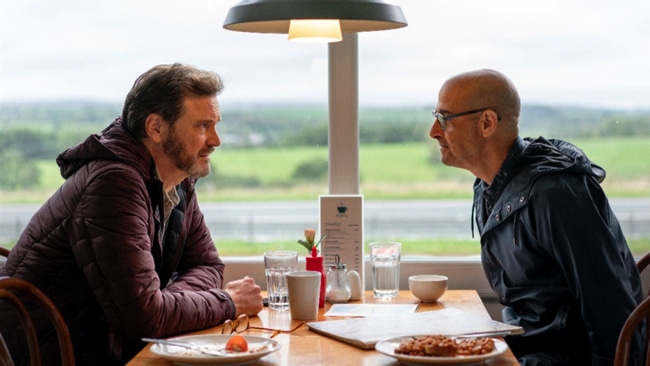 Colin Firth (Sam) and Stanley Tucci (Tusker) have an easy chemistry that makes this two-hander all the more enjoyable even though tragedy is the order of the day. On a romantic break in scenic Cumbria it soon emerges that the quietly amusing Tusker is suffering from early-onset dementia overshadowing their future together as a successful professional couple who are still in love.

Many actors have gone from Britain to the US but Stanley Tucci has done the reverse and already made several features together with Colin Firth: Conspiracy (2001) and Gambit (2012). Meanwhile Mcqueen cements his career as a writer and director joining fellow creative talents from Leicester including: Stephen Frears, Michael Kitchen, Una Stubs, and the Attenborough brothers. Firth and Tucci perfectly compliment one another’s star power with Sam being the more thoughtfully anxious of the two and a perfect foil for Tusker’s sardonic charm.

Whether or not Firth entirely suits a beard as a renown semi-retired concert pianist Sam, is up for question, but he is deeply enamoured of novelist Tusker and their warmth and genuine feeling for another is what really powers the film forward – along with Tucci’s caustic sense of comic timing.

The brooding hills and dales of the Lake District give this soberly-toned piece an added chill of encroaching winter – not only thematically but visually – in Dick Pope’s painterly camerawork. Old age, lasting love and mental decline are issues of universal concern, even more so in these pandemic days that have rocked our emotional wellbeing to the core.

After the jokey, love-affirming scenes of the camper van journey and the bonhomie of a shared evening with friends and family, the tone becomes more downbeat as the two plummet the depths of despair in their tortured soul-searching. But Mcqueen does not labour the point, taking a less is more approach and focussing on the wit and repartee that makes these two so close as a couple. All we need to know is conveyed by the emotional weight of the performances, and Tusker’s comment : “I want to be remembered for what I was, and not for who I’m about to become”, putting the focus on the positive side of their relationship. It is a dreaded phrase that speaks volumes for those affected by illness and has a uniquely 21st century ring in these days of dread disease. Sam retorts: “You’re not supposed to mourn somebody when they are still alive” But sometimes this is the best way.

Mcqueen also addresses a less obvious aspect of mental illness showing how an unexpected change in dynamic can derail the most stable of relationships and put the status quo into question. And this is the dark stain that slowly spreads across the film as the pair consider the future. Mcqueen’s deft scripting handles these dark night of the soul moments with a lightness of touch that hints at the trauma while avoiding a full blown meltdown. And this is where Firth and Tucci really come into their own, giving the film a textural richness and humour that is vital to make it all watchable and enjoyable, rather than mentally exhausting. Firth has the emotional range to explore the issues and Tucci the dexterity to deliver tenderness with just the right gravitas.

After the spectacular countryside of the expansive early scenes the film becomes more of an introspective chamber-piece as it gradually closes in on an intimate finale. Supernova brilliantly exudes a sense of Englishness: decent, noble, restrained and strangely satisfying. MT