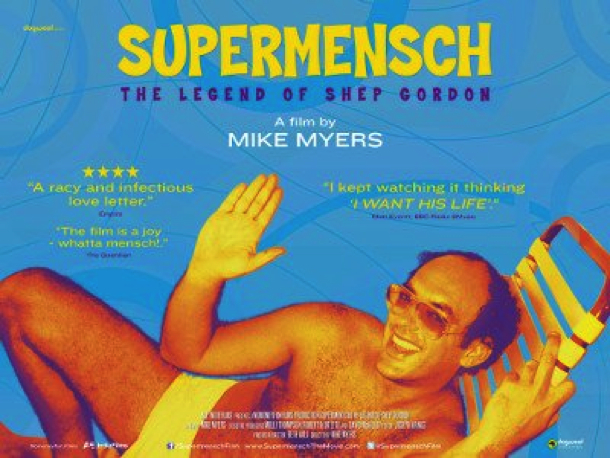 Dir.: Mike Myers; Documentary; USA 2013, 91 min.
Mike Myers is a long-time Gordon admirer, since they pair met whilst working on WAYNE’S WORLD. This is a sensitive portrait and even though the interviews take up a little too much time, Myers offers up more than just a celebrity hero’s portrait.

It emerges that Shep Gordon’s success was born out of a very different career than originally intended.  Finishing his BA in sociology in 1968 at the State University of New York in Buffalo, he wanted to save the under-privileged – so he set out “on a white horse” to LA, to become a mentor for juvenile offenders. Things didn’t work out and but swinging by the Landmark Motel in LA one night, he heard a young woman screams. Fearing that she might be raped, Gordon stepped in to save her – but got a punch in the face for his trouble. Later that same woman came to his room to apologise. This is how Gordon met Janis Joplin – next day she introduced him to Jimmy Hendrix, who asked him “Are you Jewish?”, and after Gordon nodded affirmative, Hendrix said “You should be a music manager”.  Since he was out of a job, Gordon followed the advice and the rest, as they say, is history.

One would think that the career that followed was rather a let-down after this heady start: But on the contrary, the names he managed are legendary, starting with his first client a certain Vincent Furnier, who had just adopted his stage name Alice Cooper. In order to make his client a star, Gordon decided to launch a publicity stunt – bringing the traffic at Piccadilly Circus to a halt by dropping 18 000 pair of knickers from a helicopter over the audience while Cooper was performing at the Hollywood Bowl, and, most (in)famously, Cooper and his audience threw a chicken around.

Cooper was not the only mega-star (the two stayed very close) on Gordon’s book: Blondie, Luther Vandross, Teddy Pendergrass, Raquel Welsh and Anne Murray, to name a few. But Gordon got tired (and too old) for the music business– you can only run around in a tea-shirt with the legend “No head – no stage pass” so long. An older and calmer Gordon was responsible for “inventing” the independent American cinema (”before the Weinsteins and Miramax”). Together with Carolyn Pfeiffer he produced Ridley’s Scott debut THE DUELLISTS which won the 1977 Jury price for best first film in Cannes (the Camera d’Or was born a year later). They produced STOP MAKING SENSE, the Alan Rudolph and Sam Shepard movies. And as a distributor with “Cinecom” Gordon brought KOYAANISQATSI” and NORTE to the USA. After meeting the Dalai Lama (and becoming a ‘Jew-Bu’), Shep was responsible for creating the success of ‘Master Chefs’, after meeting Roger Verge. Gordon was astonished to hear how little respect (and money) the Chef earned, and in Roger Verge he created the first TV master chef.

His personal relationships, are, alas, without their happy-endings. Whilst he has his own surrogate family, looking after four grandchildren of his ex-partner, his greatest wish to have a son, is still unfulfilled. A relationship with Sharon Stone lasted a few years, but petered out; a later marriage ended after three years. And after waking up from a life-threatening operation, his employee found The right words: ”There he was, waking up, only seeing me, a paid employee. He must have been very sad”. Then we see Gordon, wandering around on the island of Maui (Hawaii), where he has lived for the last decades, visited by all his famous friends he kept for life, like Michael Douglas, Sylvester Stalone and Willie Nelson, who appear in this film, singing his praise as a compassionate man. Shep Gordon, the man who had everything in his many incarnations – apart from lasting intimacy. AS