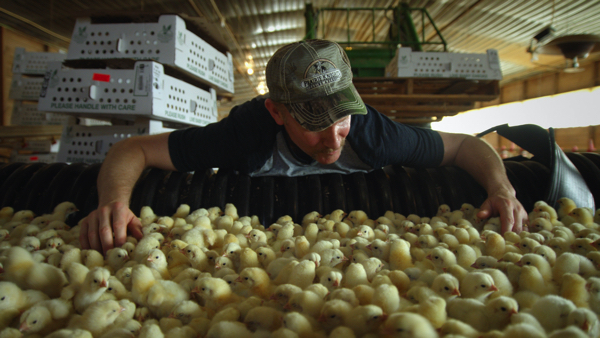 Fifteen years after his ground-breaking expose on the fast food industry Spurlock is back with Super Size Me 2: Holy Chicken! that sees him on the other side of the debate – as a fast food restaurateur.

This fast flowing and informative film explores an US industry dominated by franchises, and glibly-named eateries – mostly based in industrial parks rather than on the high street. Here Spurlock sets out to make a crispy chicken sandwich with healthy credentials.

Spurlock is seen talking to marketing experts and involved in preparations to open his own restaurant, choosing a chicken sandwich made from his farm’s birds to appeal to changing tastes. Fast Food has gone through a vast transformation since Spurlock sat down to a table at the Golden Arches for his 2004 breakout. Nowadays consumers demand better-for-you cuisine, but there’s also a great deal of spin going on – and legal experts spill the beans on what we think we’re being offered, and what producers actually get away with in the name of decency. “Free range” just means that chickens get an option to step into an outdoor pen in the fresh air, but most stay inside, particularly in the sweltering heat of Alabama where Morgan sets up his Morganite chicken shed whence his chicks will eventually end up in his crispy (fried is a negative word) Southern Chicken sandwiches.

But some scenes are hard to swallow particularly those that show the appalling cruelty of the food industry. We see baby chickens from the time they break out of their shells to their deaths, six weeks later, from overweight, heart attacks and the sheer exhaustion of supporting their over-sized bodies on legs that have not had time to develop any strength. A troubled farmer from Alabama also talks about the unfair system in the US which leaves the smaller concerns under pressure to produce often sub standard fare.

But for the most part Super Size 2 is slick and entertaining with the chipper filmmaker flippantly joking around as he travels up and down the US taking on the advice of advertising gurus, lawyers and spin-doctors in the name of his cheerlessly ‘foul’ venture. MT.

SUPER SIZE ME 2: HOLY CHICKEN! is released On Demand from 9th December 2019