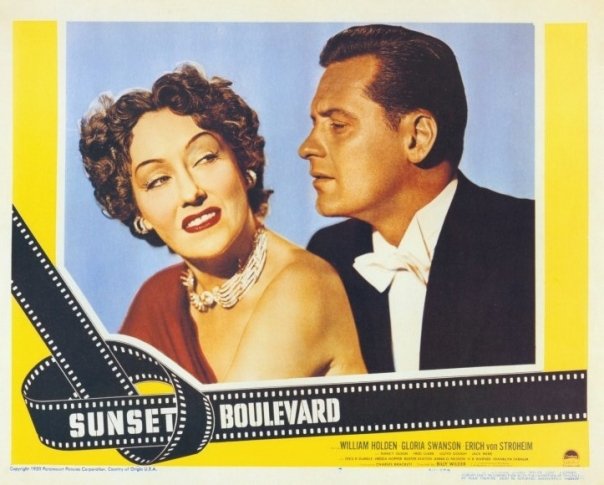 SUNSET BOULEVARD is one of those rare films that you can review without need for a spoiler alert: its protagonist starts the film dead and is still resolutely dead at the end of the picture. We know who shot him: Discovering why is what matters.

A down on his luck screenwriter Joe Gillis (William Holden) is introduced to us as a corpse in the swimming pool of Norma Desmond (Gloria Swanson). In a long extended flashback, Gillis’s off screen narration accompanies his journey to the pool. Gillis’s deathly form of existence (being paid to doctor up a terrible Salome script) and Desmond’s attempt to resurrect her acting career are ghoulishly riveting in this supreme horror comedy.

SUNSET BOULEVARD is satire of the highest order. Billy Wilder and Charles Brackett’s script is full of trenchant observations of character, time and place. Hollywood’s a cruel world ruthlessly disposing of its talents and non-talents; where deluded assertions of self-worth thrive. When Gillis talks of a ‘comeback’ Desmond strongly rebukes him. “I hate that word. It’s a return to the millions of people who have never forgotten me for deserting the screen.”

Wilder’s film equally glistens as a film-noir. Joseph F. Seitz’ camerawork showcases the shadowy ‘old dark house’ feel, juxtaposed with the shine of the real fifties Paramount Pictures studio lot that deepens the power of the story as much as its witty screenplay. Gloria Swanson was fifty when SUNSET BOULEVARD was produced. Wilder wanted Seitz’s photography and the make-up department to have her look slightly older to show that her glamour was past its peak.
Near the end of the film, Desmond wants to enter Gillis’s room to ‘comfort’ him (we are made to assume that he’s now her reluctant lover) but pauses to look in a mirror. For me Swanson’s raising of her hands and mesmerised look, as he stares at her image, echoes James Whales’s The Bride of Frankenstein. Slight jerks of the head and preparedness appear Elsa Lanchester-like; the bride looking for small signs of re-created beauty to attract the ‘groom’ (William Holden – often in bought old-fashioned evening dress) and Desmond’s former audience (that Cecil B. De Mille generation when Salome projects were once all the rage.

SUNSET BOULEVARD is a very black film. Yet for all its grotesquery it never topples into camp nonsense. It’s too seriously bitter to ever allow that. Wilder and Bracket cleverly balance BOULEVARD’s light and dark. For the ‘normal’ scenes of Gillis with Betty Schaefer (Nancy Olson), a reader at the studio who falls in love with Gillis, are genuinely touching and tender interludes that relieve, but never soften, an abnormal tale. William Holden, Gloria Swanson, Nancy Olson and Erich Von Stroheim (Max, the creepy butler) give brilliantly sympathetic performances. All perfect casting in a film about the vanity of acting out of roles and the writing of stories to maybe please some head of a studio, but never its washed-out Salomes. ALAN PRICE