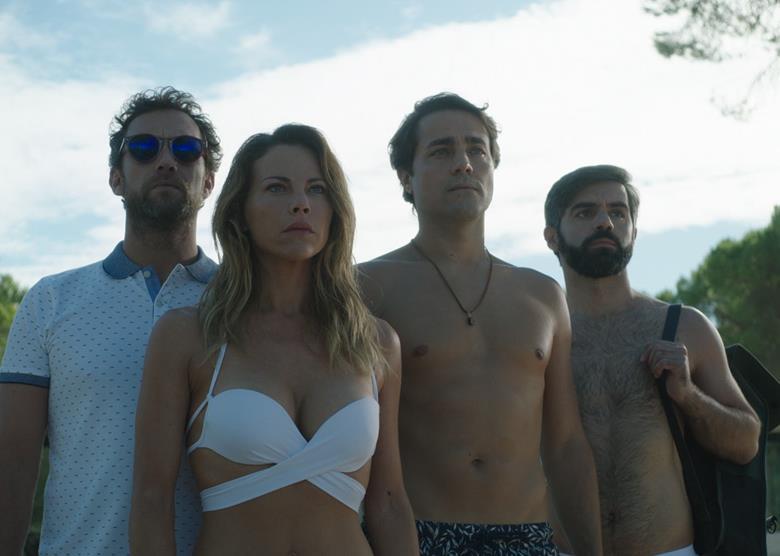 This sexually fluid and visually lush love-in has shades of François Ozon La Piscine to it- except Ozon’s sizzling storyline puts this tepid affair distinctly in the shade.

In the heat of a languid Portuguese summer four beautiful people are languishing in a fabulous villa, sunning themselves and salivating over the next meal. A phone-call disrupts their placid naval-gazing to announce an absent friend, now back in town will shortly pay them a visit. David’s call sends unnerving ripples through the tepid torpor. Clearly he has touched their lives in different ways. His imminent arrival now creates waves of tension in this becalmed backwater as they cogitate and speculate over the outcome.

Their laconic exchanges over lunch are laced with nervous insinuations as the memories of David come silently back to haunt them. Cocktails on the terrace take a more sinister turn; their after dinner sambas seem more urgent, as distant sirens announce a far away fiasco in the cool of the night.

David’s imminent arrival casts a pall over their pleasure, both individual and collective, as they remember how he slighted them each in his own special way. Yet they seem to savour the betrayal and the hurtfulness it caused them, secretly fostering hopes for a positive reunion, why ruminating over his motives, as he talks to them, unspecifically, in voiceover.

At the end of the day, this is a story that sounds much more interesting than it actually ends up being on the big screen. These beautiful people feel strangely empty in the picture perfect place they inhabit, each possessing a curious lack of personality and certain, spontaneity. Sunburn is has a brilliant premise, poorly executed, a missed opportunity for the something really stunning. MT