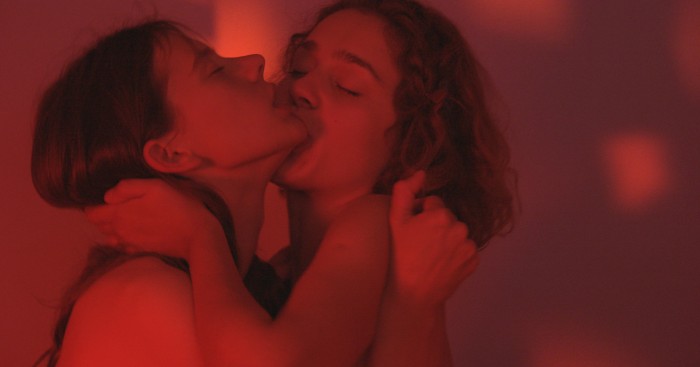 The rapturous swoon of adolescent love is the primary focus of THE SUMMER OF SANGAILĖ, the fleeting portrait of a same-sex romantic fling between two teenage girls in rural Lithuania. Having premiered in Sundance, where it won Alantė Kavaïtė a Best Direction award in the World Cinema category, this easygoing, sensitively handled drama has already enjoyed deserved longevity on the festival circuit and screened in the ‘New Waves’ section of the 12th Seville European Film Festival.

As Lithuania’s entry for the Best Foreign Language Oscar, THE SUMMER OF SANGAILĖ is refreshingly swift and cheery in comparison to the country’s more celebrated but openly pessimistic fare. And though it might lack the steadfast political preponderance of, say, a Sarūnas Bartaš picture, it’s a commendably audience-oriented feature that taps into an increasingly mainstream market longing for portrayals of gender and sexuality that veer beyond the routine and well-trodden—a market that already included Palme d’Or winner BLUE IS THE WARMEST COLOUR and which is now fronted by Todd Haynes’s plushly designed Oscar contender CAROL.

The eponymous protagonist of THE SUMMER OF SANGAILĖ is a lanky, slightly withdrawn 17-year-old (played with adroit minimalism by Julija Steponaitytė) who’s staying with her parents at their chic-shack holiday villa. She first encounters infectiously convivial Auste (Asitė Diržiūtė) when the latter sells her a raffle ticket at a local airshow. Though she begins to hang out with her new pal, Sangailė’s initial interest is in one of Auste’s boy friends, though the time the two girls share alone gradually blossoms into a sexual draw. Approximating the exponential way in which love can engulf us, the film intensifies its scope: for long sequences here, every other character seems to fade away, as Sangailė and Auste indulge in gambolling fashion shows, sunkissed photography sessions and, inevitably, atmospherically lit lovemaking.

Kavaïtė, working on only her second feature—her first, ECOUTE LE TEMPS, was made more than seven years ago—is perhaps well positioned to frame Sangailė as an outsider, having herself lived in France for the last 17 years. Indeed, the writer-director does well to encapsulate the unpredictable ways in which chemistries form and attractions develop. Here, the characters’ needs shift according to a complex arrangement of circumstantial factors: intimacy, trust, confidence, feelings of alienation, and so on. Bored by parental pressure to decide upon a lifelong profession (she embarrasses her mam and dad by saying, when asked, that she wants to grow up to be a whore in front of their friends), Sangailė really wants to be a pilot, watching on with equal fascination and fear as propeller planes perform daredevil flips in the film’s opening credits sequence.

It’s a fitting metaphor. Not only does it establish at the outset that Sangailė has a passion specific enough to mark her as an atypical teen (and thus, an archetypal outsider in several ways), it also helps to characterise the topsy-turvy nature of teenage love. In this, the film is helped immeasurably by a swelling strings score by Jean-Benoît Dunckel, an otherwise rousingly overdone soundtrack that here perfectly compliments Sangailė’s scorching spirals of self-discovery. MICHAEL PATTISON