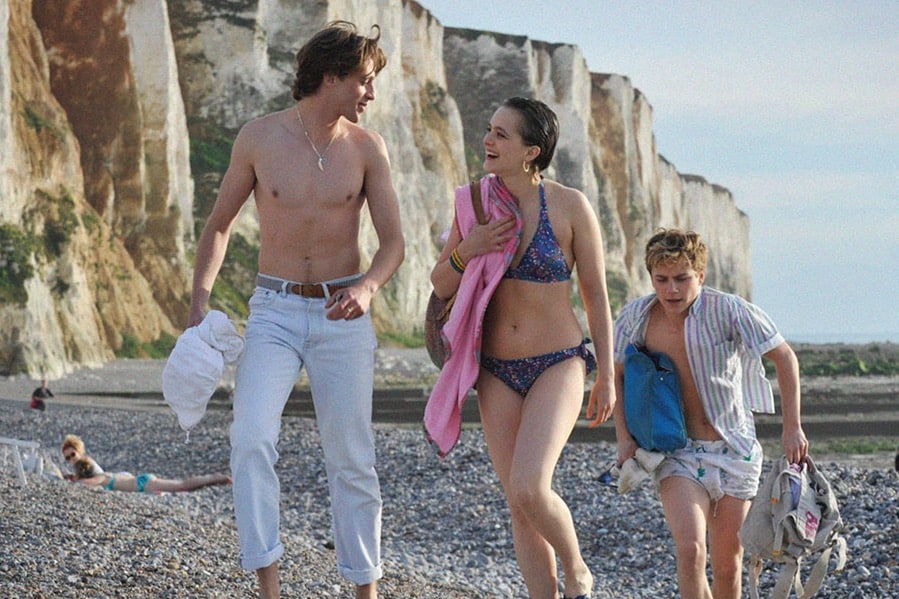 This upbeat breezy retro teenage love story is set in seaside Normandy over six weeks in the summer of Summer Of 85. As usual Ozon doesn’t take things too seriously but the romance feels real and the lively score of ’80s hits and memories of holidays in Normandy make this a sunny treat for everyone.

Aiden Chamber’s paperback original ‘Dance on My Grave’ took place in Southend-on-Sea but Ozon choses the Normandy coastal town of Le Tréport for his version of the tale with its strong emotional undercurrent stemming for the elation and them pain of first love showing how the central character discovers writing as a therapy for his broken heart.

Summer of 85 is more tragic than comic but Francois Ozon has a clever way spicing his dramas with subtle and subversive humour always leaving it open to individual interpretation. And there are random moments that may raise a smile, or may not. The balance is always delicately poised.

Alexis (Félix Lefebvre) is a cherubic blond 16 year-old, who hints in the opening scenes that see him in police custody, that the film will end in tears but we are not told why. And this is the enigma that hooks us into the plot driven forward by his literature teacher Mr Lefèvre (a moustachioed Melvil Poupaud)  disguise) who tries to persuade Alexis to write about his experience even if he can’t talk about it.

Gradually the story spills out in flashback narrated by Alexis who takes us back to the start of summer when he decided to take his friend’s boat for an afternoon’s sailing. Storm clouds soon gather and he is thrown into the water only to be rescued by another sailer in the shape of David Gorman,  (Benjamin Voisin) a dark-haired 18-year-old adonis who certainly knows the ropes.

Soon the two are back at David’s where a voluptuous Valeria Bruni-Tedeschi plays a welcoming Jewish mum Mrs Gorman who also runs a business specialising in sailing tackle. Admiring Alex’s own tackle she runs him a hot bath. Realising her son needs a close friend, but does realising yet just how close, the boy’s budding relationship blossoms, and he is offered a role in the business. But there’s good fun to be had — riding David’s  motorbike and sailing – not to mention between the sheets in this hedonistic affair that positively froths with youthful exuberance especially when a Kate (Philippine Velge) a frisky young au pair from England joins the party. Meanwhile Alex’s mother (Isabelle Nanty) and father are a more down to earth couple anchoring him in the reality of their working class set-up.

Summer in Normandy in always going to be a winner visually, whether down on the beach or in the verdant hinterland the setting is strikingly beautiful and DoP Hichame Alaouie conveys a retro feel with his Super-16 camerawork. And one of the best things about Summer of 85 is its rousing soundtrack of ’80s hits from The Cure’s ’In Between Days’ to Rod Stewart’s ’Sailing’. As David, Benjamin Voisin’s striking charisma carries the film: his confident intensity and effervescent charm set him out to be a star in the making. MT.