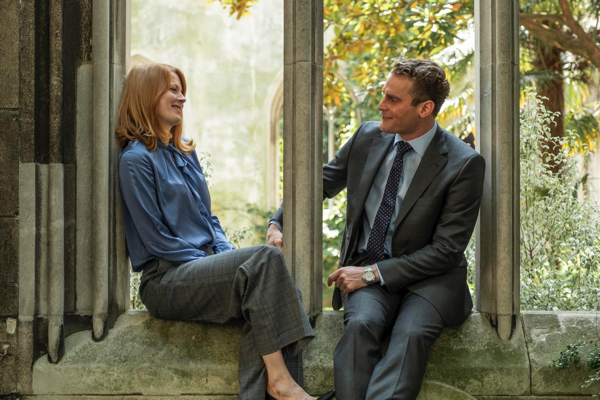 Based on the real life of NSPCC campaigner David Tait and adapted for the screen by Susie Farrell, Sulphur and White is a flawed but filmic arthouse drama. David’s childhood in South Africa is convincingly told but Jarrold’s depiction of his time as an investment banker bears no relevance to real life in this domain.

Ten year-old David (Stone) lives with his loving motherJoanne (Friel) and his banker father Donald (Scott) in a small-town  South Africa. Donald is a violent man to both his wife and David, forcing him to work for the owner of the local petrol station who subject him to longterm sexual abuse with the implicit consent of his father, who, having lost his job at the bank, takes the family back to the UK, where he continues to assault his son, before his wife finally puts her foot down.

As a teenager, played by Anson Boon, David gets his own back, and emboldened by his successful a career in the city where Mark Stanley takes over the role, he is singled out by his boss Jeff Connors (Petrie) with praise and promotions. Invited by Jeff to an “Alice in Wonderland” theme party, he repays him by sleeping with his wife Amber (Craig) Jeff commenting the next morning: “you remind me of myself, I have watched you all night”. The turning point comes when David meets Vanessa (Beecham) and although the couple have a baby son and enjoy a lavish lifestyle the past comes back to haunt David.

David Tait has been an important ambassador for the NSPCC, and has raised over fifteen million pounds, climbing Mount Everest five times. His life really deserves a more considered and low-key drama – or even a documentary, instead of this over-extended focus on his time in the fast lane. DoP Felix Wiedemann has milked the party scenes and other moments in a voyeuristic and sensationalist way. Stanley never really inhabits his role with any authenticity, Beecham lighting up the scenes where she gets a chance to shine. Dougray Scott is brilliant as David’s sleazy father. With rising abuse figures, and victims often locked in their pain forever, David Tait and other sufferers deserve a more sensitive director and writer, interested in telling the story in a less conspicuous way. AS