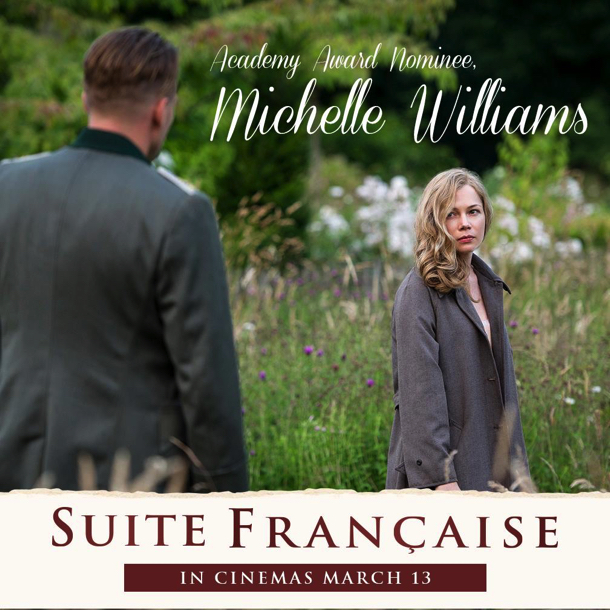 SUITE FRANCAISE is a sumptuous arthouse drama based on Iréne Némirovsky’s bestselling story of human nature and forbidden love in Nazi-occupied France during the Second World War, when a young French woman (Michelle Williams) falls for a German officer, in the shape of Matthias Schoenaerts who also stars in A LITTLE CHAOS, THE DROP and FAR FROM THE MADDING CROWD releasing the year.

Director Saul Dibb (THE DUCHESS) opens his drama with an impressive aerial bombing raid over the fields just outside Paris in an idyllic country village, where gifted pianist Lucile (a delicate Michelle Williams) is living with her severe widowed mother-in-law (Kristen Scott Thomas) a sharp business woman and local landowner, awaiting news of her husband Gaston, a prisoner of war. As Parisians flee to the countryside, German soldiers are moving into their village of Bussy, taking up residence in the homes and changing the clocks to German time. As they live in best house, naturally an officer of some standing and quality moves in (Matthias Schoenaerts and his dog), sending a frisson of through a household that has not had a real man across the threshold for quite some time. Madame Angellier is furious at the intrusion particularly when Bruno asks for the keys to the piano (he’ll probably end up playing Deutchland Uber Alles) But Bruno von Falk trained as a composer before the war and he emerges a sensitive and cultured gentleman, bonding with Lucile over music as a tentative and respectful friendship develops away from the steely gaze of Madame Angellier.

As this forbidden love story unfolds in the background, Wartime rages all around them, and another more fascinating battle starts in the village between the local French themselves, who all eager to do each other down, anxious to keep in with the German soldiers and vying for approval and favours, in this richly textured, three-strand narrative, superbly captured by Eduard Grau’s expert camerawork (he lensed A SINGLE MAN). Lucile is played with a timid grace and elegance by Michelle Williams: she is clearly under the control of Madame yet lonely and starved of love and affection in the absence of her husband. Her conscience is also piqued by her friendship with a crippled farmer Benoit (Sam Riley) and his wife (played by Ruth Wilson). When unwelcome advances from the German soldier occupying their farm end in violence, Benoit is forced to go into hiding, and Lucile feels responsible for offering him a safe haven in their house, leading to tragedy for the whole village.

SUITE FRANCAISE is strongest in the scenes where Schoenaerts and Williams work their magic in a story with only two appealing protagonists: Lucile and Bruno. But Williams and Schoenaerts achieve a sizzling chemistry particularly in the final tear-welling scenes. Schoenaerts also manages to command authority but also, crucially, engage our sympathy for his sad past, which is never convincingly explained. Kristen Scott Thomas gives a superbly sneering turn as the tight-lipped Madame Angellier and has all the wittiest lines. In a story that explores the human condition and our vulnerability during crisis, the other characters feel one dimensional and uninteresting. Ruth Wilson is an unlikeable and unsympathetic woman and so is her husband Benoit (played without a scintilla of charm or enthusiasm by Sam Riley). The Viscount de Montmort (Lambert Wilson in great form) has integrity and dignity but his wife (Harriet Walter) is shallow and unremarkable in an otherwise moving and beautifully-crafted look at life for ordinary people during Wartime. MT