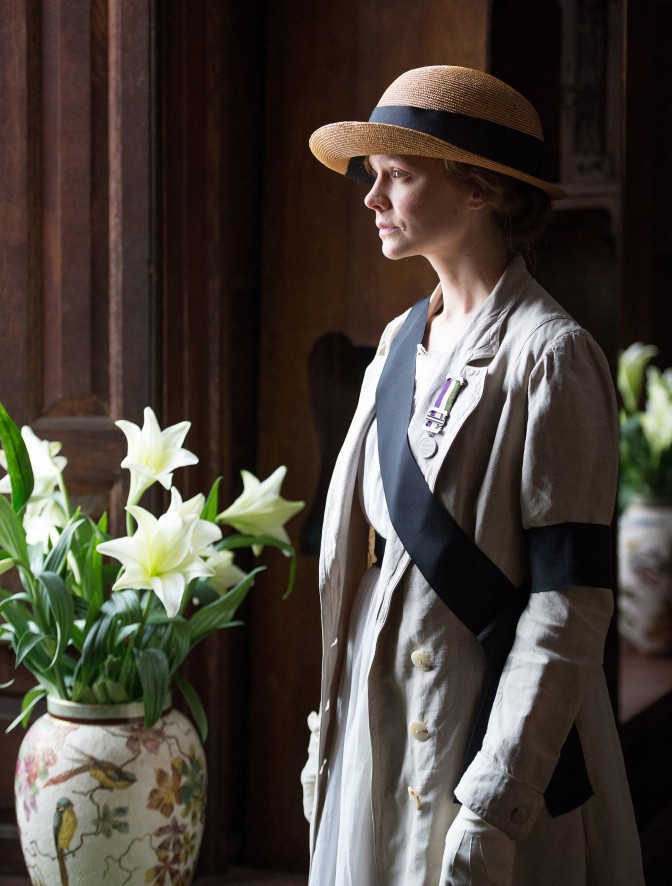 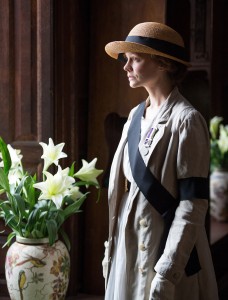 All worthy themes deserve great treatment. So, whilst SUFFRAGETTE is very important in its subject matter, that doesn’t axiomatically make it the success it deserves to be.

Sarah Gavron has made a valiant attempt to convey the gruesome conditions of working women in the early 20th century. Maud Watts (Mulligan) is a laundry worker in Bethnal Green in the 1920s. She has worked part time since the age of seven, full time since she was twelve. In her early twenties, she has made it to the top of her career, as far as women are concerned in this workplace, which is closer to a workhouse than anything we know today. At home, her husband (Whitshaw) hides his weakness behind an authoritarian manner – their son has to bow to a picture of the ruling monarch Gorge V. before he goes to bed. Encouraged by her co-worker Violet (Duff), Maud joins the suffragette movement. Soon she is on police photos, which are brought to the attention of Inspector Steed (Gleeson), who tries – in vain – to make an informer of Maud. Whilst in the factory, the brutal manager Taylor (Geoff Bell), who sexually abuses women on a regular basis, threatens Maud, her husband throws her out of the house and then gives their son up for adoption – in a heart-breaking scene. Literally driven underground, Maud interacts with historical figures of the women’s movement like Edith Bessie New (Bonham-Carter), a pharmacist and bomb maker, as well as Emily Wilding Davison, who was famously fatally injured,when she threw herself in front of one of the King’s horses at the Derby in 1913. Emily’s sacrifice, witnessed by Maud, cements her will to fight.

Sarah Gavron’s aesthetic approach falls somewhere between a Hollywood blockbuster and a British kitchen-sink drama. Whilst the pace is always furious, the camera shows either panorama shots (with a few unnecessary crane-shots thrown in) or close ups, never coming to rest with medium shots, which should establish the characters. The relentless use of one-to-one images (in the name of realism) leave nothing for audiences to imagine. The characters are often too one-dimensional, because there is no time to explore their motives and history. And it is not asking for much to grant some of the protagonists some ambivalence. In the case of Taylor there is no need for this. But with Steed, a man driven by his profession rather than his knowledge about the eventual outcome of the struggle, the character deserves a more sublime approach. And Meryl Streep’s vignette as Emmeline Pankhurst, with her speech from a balcony, is surely too close to a caricature of a leader.

As far as the acting goes, a sterling British support cast generally does well. Mulligan gives a subtle performance, but not a brilliant one: the action plays out in her eyes but her screen presence is over-shadowed here by Helena Bonham-Carter and Nathalie Press, whilst Bell gets his brutal macho image absolutely right.

SUFFRAGETTE is an important film, not least for the fact that the social conditions of working women were gruelling in those days: they not only had to work from early childhood, they were sexual prey for all men: Taylor’s attitude shows that he has the right to get his way with any woman on the shop floor. And even the upper and middle class women were financially dependent on their husbands: when one of the women asks her husband to pay bail not only for her, but also for the working class women (to save them from prison), the gentlemen refuses, even though his wife reminds him that it is her money he is reliant on. SUFFRAGETTE is a timely reminder how much women were at the mercy of men: they were objects to be used, mistreated and punished like children: they were forced to turn to violence, (as women often still are today): the only language men understand, to free themselves.