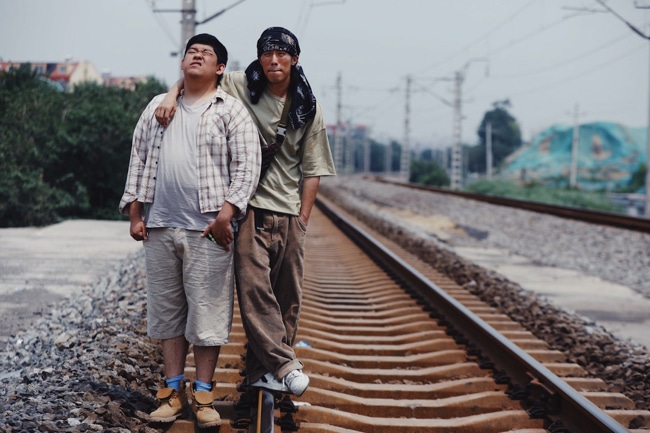 Wei Shujun won a Special Award for his short film On the Border at Cannes 2018 and was back in the competition selection again this year with this eye-catching but flawed drama which overstays its welcome at over two hours.

Based on Wei Shujun’s own experiences, Striding Into the Wind is a footloose road movie that offers a snapshot of modern China through the life of two film school layabouts. Essentially a series of episodes that take place in and around  Beijing where restless sound technician Zuo Kun (Zhou) is taking time out from his final year studies behind the wheel of a beaten-up Jeep. Kun can’t seem to commit to anything – let alone a driving test – and we see him flouncing off in a fit of rage when things go wrong. The Jeep eventually becomes a liability: he is stopped for driving under the influence and ends up in prison, where his warden Dad is able to get him an early release.

Kun’s portly comrade in arms, Tong (Kai) is a junk food addict who rolls out of bed just in time for the college start at noon. The women is Kun’s life are more practical: his long suffering girl A Zhi (Yingchen) lends him cash, and his mother, a university lecturer, supplies exam papers which sell for good money on campus. A film shoot provides the opportunity for the pair to break loose and  decamp to Inner Mongolia where they attempt to lock down their film project and Kun makes a play for the Mongolian star actress.

What saves this from being an empty rant in celebration of juvenile delinquency is the imaginative visuals bringing to mind early 1980s features by Hsiao-Hsien Hou. Shujun’s sycophantic treatment of his two main characters adds to the overindulgent feel of a film where so much talent has been wasted on immature postering. AS