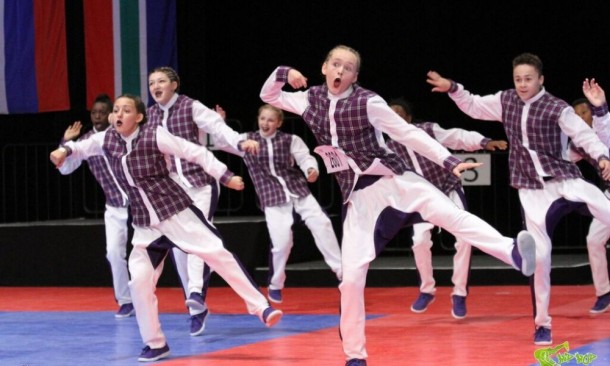 When fourteen year old Ethan, the son of filmmakers Debbie Shuter and Adam Tysoe, joined the ‘Entity Allstars’, an Under-16 Street Dance crew of twenty Hip-Hop dancers in Barking, his parents decided to film the journey without realising that it would take them from their home in Barking via Luton and Rimini (Italy) to Bochum (Germany). Here in September 2014 they were the first British team to take on the World Champions of the IDO (International Dance Organisation) in the Junior Streetdance category.

The directors called this a “passion project” – and quite rightly so. The young dancers, their parents, the choreographer, the juries and even the IDO president of the British section all infuse Streetdance Family with a spirited emotional impact on a level with the competition itself. To start with, Tashan Muir, a big burly man and the crew’s dance coach, saw himself “like a re-incarnation of Noah”. Helped on by Pater Adjaye, the religious undercurrent was very clear, and Muir certainly had all the qualities of a religious leader. Unfortunately, some of the dancers’ parents could not always keep their emotions under control, and made life for their children difficult. Petty quarrels erupted, some parents being not very good role models when it came to conflict resolution. It led to one of the main dancers missing the Bochum finals. To make matters more difficult Derek Povey, the President of the British Section of IDO, walked around the competition places, seemingly unhelpful to the course of Entity. Still, Muir held the group together and when they reached the final of the competition, he instilled an “us-against-the-world” underdog feeling in his troupe.

Being his own cinematographer helped Tysoe to capture the spontaneity and often also the chaos of the events. The rollercoaster ride is pure cinema-verite, recalling Jean Rouch documentaries about tribal rituals: with Entity coach Muir acting as the chieftain, putting his dancers into a trance-like attitude where they believed they could overcome all obstacles. The filmmakers tried not to be judgemental when it came to parental misbehaviour – resulting in early cuts when tempers flew. Overall, Streetdance Family retains a gritty indie feel, either by accident or design, and in the process achieves a hyper-realistic intensity, and an affectionate tenderness for the young dancers. AS