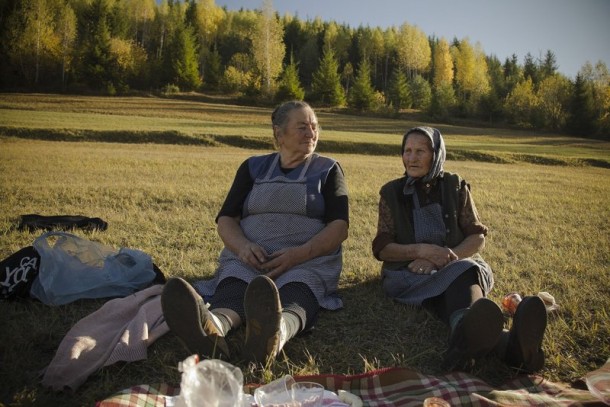 The ability to speak your mind, honestly and without guile is one of benefits of old age. The game of subterfuge is over. There is nothing left to hide. Writer and director, Ágnes Sós explores the simple way of life a remote rural community in Hungary, unchanged for nearly a hundred years. The villagers (aged 75 – 90+) share their stories without coyness or sentimentality; telling it like it is and calling a spade a spade. At least twenty five of them are widows. But of those still married, one woman confesses honestly of her husband: “Why didn’t God take the desire, when he took the ability.” Others are more appreciative and candid when they talk about their memories and experiences of past pleasures But one lonely man admits: “I can’t have a good one, But I don’t need a bad one.” Most of the revelations seem to revolve around sex or relationships but the villagers have all reached a stage in life where they are are grateful to be enjoy the simple daily routine and the rhythm of the seasons: Raising and tending the animals, kneading the bread, growing produce and preparing food. And one chap also adds: “I’ve been mad about love and kissing, all my life”.

Ágnes Sós filmed this endearing doc over a two-and-a-half-year period with the help of her cinematographer Zoltán Lovasi. In the quiet corner of rural Hungary, there is not a car, a modern building or or a ‘phone mast in sight and many of the villagers still ride around in horse-drawn carts including Ferenc, who still has an eye for the local ladies and often greets them with a pleasantry as he passes by. The women have the same desires as the men; one talks of being the most attractive and cleverest in the village, but also confesses to murder at the ago of 80. Another admits she didn’t enjoy an orgasm until she was well into her sixties, and by her own hand, while washing. She also adds that there is nothing better in life than being in love. Preferring the old ways of courting, the men are eager to insist that they still feel randy and can even still perform ‘but not one after the other!’ Clearly, this is a society where men have always been respected and obeyed yet one man does admit that he tolerated his wife’s infidelity, putting it down to her ‘unusual needs’. Strangely no one talks very much about their success in business or material wealth. The message is clear from these old folk: ‘enjoy love and sex while you’re still able’.

The most heartening aspect of this documentary is the not just the closeness of this strong community but the glorious natural beauty of the Hungarian countryside during the daisy-strewn Summer and in the glistening snow – the colour green dominates both outside in the grassy meadows and hills and inside where is seems to be the choice of wall-colouring or garments. The only sad memory we take away is of a trusting and faithful group of people whose way of life and fond attachment to the land will soon be gone forever . MT

STREAM OF LOVE is SCREENING AT BERTHA-DOCHOUSE at the newly refurbished CURZON BLOOMSBURY –  from 28 March until 2 April 2015. Tickets HERE