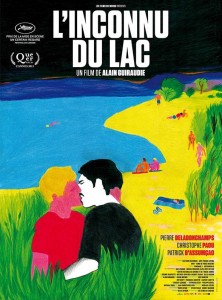 Alain Guiraudie’s STRANGER BY THE LAKE is one of the year that has really made a lasting impression. Disturbing and utterly absorbing right up until its enigmatic showdown, it may at first appear to have little to offer mainstream audiences. But what develops is a gripping psychodrama with naturalistic performances that just feels ‘real’.  Stranger is set in a naturist cruising spot for gay men by a lakeside in southern France. Stripping off on arrival, they swim and bond with each other; occasionally indulging in explicit sex in the lush vegetation nearby. Guiraudie has captured the sensuality of these torrid encounters enhanced by the natural ambient sounds of nature and sparky, realistic dialogue and simple narrative structure.  The lakeside setting provides an ideal ‘stage’ for the sinister events that gradually emerge.

Handsomely-built but hard-edged Michel (Christophe Paou)  is a regular to the hedonistic idyll; parking in the clearing, he swims each day and cruises for casual pick-ups. Is he a homosexual predator or a homophobe exacting revenge on his fellow men for their putative sins of the flesh.? Guiraudie ramps up the tension by making us rely on body language and only patchy dialogue, leaving us intrigued to know what’s going on. Franck (Pierre Deladonchamps) is attracted to Michel like a moth to a flame. An easy-going and pleasant-looking gay, Franck is open and honest; emotionally quite vulnerable.  As Michel has a regular hook-up, Franck strikes up a chatty friendship with Henri (Patrick D’Assumcao), a portly straight guy who is newly single and depressed at spending the August holidays alone.  Henri appears dismissive but also fascinated by the cruising activity on the beach. While Franck enjoys the beauty of the sunset one evening, he witnesses Michel drowning a boyfriend, after horseplay in the lake. Rather than quelling Franck’s desire for Michel, the murder seems to enhance his sexual attraction. Guiraudie captures this essence of danger that spikes when strong attraction overrides the rational brain.  In the quite calm of the lakeside, a simmering and palpable tension builds  from Franck ‘s attraction to Michel’s sexual allure.  Michel is clearly tricky; dangerous, but he fancies him to the point where seduction blocks out reason: offering the ultimate in escapism and the thrill of the unknown.

Guiraudie’s wanted to create a drama that evoked the strong emotion of falling in love passionately, not just having casual sex. His drama is thrilling; leavened by quirky almost humorous moments that prey upon the subconscious. The characters just happen to be gay rather than heterosexual and the sex feels natural and totally without sensationalism, just as any encounter may feel, irrespective of the sexual persuasion it entails.  The police inspector remarks are the casual disregard that the gay community by the lakeside seem to feel for one another. The overall tone is one of intensity and the undercurrent as unsettling as the individuals involved, but the everyday conversations they indulge add intelligent and thought-provoking texture to the story.  The cast all give performances that feel spontaneous and believable. By turns provocative and sinister,  STRANGER meditates on the nature of sexuality, solitude and the power of seduction

The Lakeside setting feels like a jungle where animals prowl around quietly, engaging  in atavistic power-play: some hoping to conquer, some hoping to be conquered, some simply enjoying the ritual. Enigmatic, amusing and mesmerising to watch, STRANGER BY THE LAKE will remain with you long after the sun has set. MT