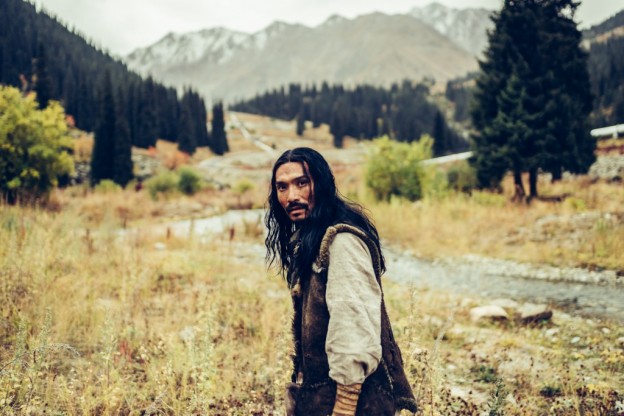 STRANGER is Kazakhstan’s Oscar hopeful, a sweeping historical and folkloric parable that sees a fearless outlaw retreating to the hills during the country’s Soviet occupation. Set to a lively mix of folk and electronic music, STRANGER is also strong on visual impact but Murat Aliyev’s magnificent widescreen cinematography of the country’s snowbound mountains and sun-baked scenery cannot sustain the film’s lack of momentum or narrative vigour and its rather vapid, underwritten central characters remain unconvincing.

In a similar vein to Turkish director Reha Erdem’s 2013 feature JîN, that followed the exploits of a young Kurdish  guerilla (Deniz Hasguler), Kazakh writer and director Yermek Tursunov explores the travails of a resistance warrior Ilyas (Yerzhan Nurymbet) who decamps from his childhood village after losing his parents during the 1930s Soviet hostilities, and settles for a precarious, nomadic and spiritual life in a mountain retreat where his only companions are the local animals and wildlife. But Ilyas is gradually to fall from grace for refusing to join the cause at the outbreak of the Second World War.

This is a worthy and watchable portrayal of a slice of Kazakhstan’s past. That said, the historical background of STRANGER is quite patchy. It appears that Kazakhstan was traditionally home to nomadic tribes who had lived under their own traditions and mores for centuries until the Russian Empire claimed the territory at the turn of the 20th century and subsumed it into the Soviet Union during the 1920s. During Stalinist collectivization in the late 1920s and 30s, the Kazakh’s nomadic life was threatened as farms were forced into collectives to provide food for the burgeoning industrial cities of the motherland, resulting in the death from poverty and starvation of millions of locals. Dissidents deported from Russia, fetched up in the region where they lived also lived a bleak and rootless existence, as seen in the character of Roza Khairullina. But the main fault with STRANGER is a our lack of empathy for any of these characters who appear so faceless and sketchily drawn that by the final showdown we couldn’t care tuppence for any of them. MT