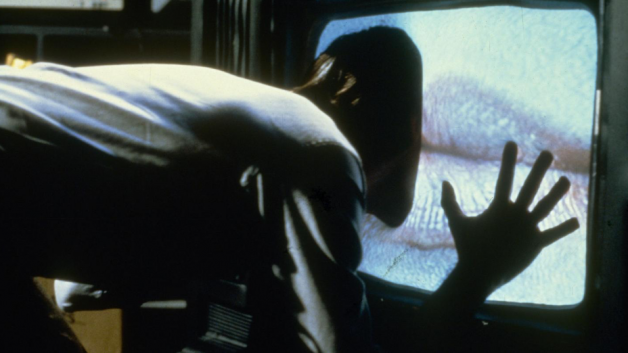 May 18th, 2020
Author: Meredith Taylor
Dir: Jonathan Demme | With David Byrne and Talking Heads |Biopic, 84′
A musical biopic in the best sense of the word. In Hollywood December 1983, Jonathan Demme films three concerts from Scottish maverick music maker David Byrne, rolling them out without explanation or talking heads – although Talking Heads are very much part of the scene. The bands speaks for itself and we get the best seats – on stage, up close and personal and from the back of the auditorium, even loitering in the wings.
Demme’s film is an energising experience made at the climax of what would be the band’s final major tour. The show starts with the beat-driven Pyscho Killer and works its way through a classic repertoire with hits such as, Take Me to the Water to This Must be the Place that scored Paolo Sorrentino’s film of the same name in 2011 and of course, Once in a Lifetime. Byrne gradually relaxes from taut jutting-faced uncertainty to a more smiling and febrile intensity, a style icon in white plimsolls and oversized concrete-coloured suits. Hypnotic to look at, his moves are as funky, smooth and syncopated as Bing Crosby or even Elvis without the sexual magnetism: Byrne is a performer more artfully ambivalent in his erotic appeal, but none the less legendary. And he feels very much at home on his own or surrounded by his family of Talking Heads. A nostalgic, diverting, happy film. MT
NOW ON BFI PLAYER
https://youtu.be/yCXT5Fs-V10
Copyright © 2022 Filmuforia