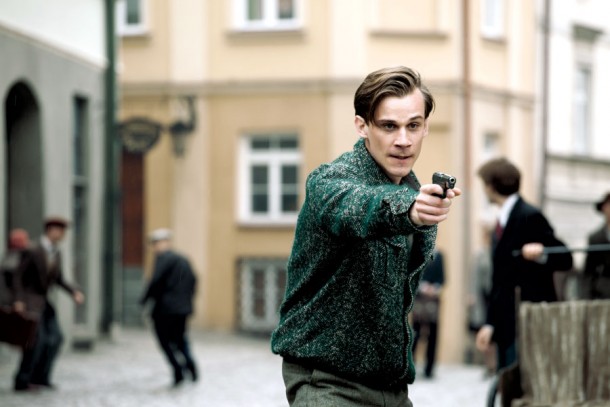 Robert Glinski’s drama, a remake of Jan Lomnicki’s Operation Arsenal from 1978 is based on the non-fiction novel by Aleksander Kaminski, first published underground in 1943 during the Nazi occupation of Poland, before it became a book on the curriculum of every Polish school after the war.

Kaminski based his chronicle on the clandestine fight of “Grey Rank” members, the equivalent of Poland’s Boy Scouts, who took up arms against the occupiers. Glinski positions his three heroes, Rudy (Zietek), Zoska (Sabat) and Alek (Szeptycki) in the centre of the action: first the three friends form their own “Grey Rank” unit, trying to sabotage the Germans, before they buy weapons and become part of the “Home-Front” Army, the official Polish resistance force, coordinated by the Government in Exile from London.

The main thrust of STONES FOR THE RAMPART is the liberation of their leader Rudy from the Gestapo. Whilst Rudy is tortured, Zoska and Alek make an exhaustive attempt to get permission from the Home Army to free him: the professional soldiers are not so keen to risk the lives of the resistance fighters. Finally, Rudy is sprung, but tragedy ensues for this brave trio.

Whilst the heroism of the young men deserves to be remembered, they also deserve a more subtle concept without so many clichés. Glinski’s all-out action approach gives too little room for the individuals and their rather complex family lives to be developed to their full potential. This ‘all-guns-blaring’ style with its bloody overkill in the torture scenes lacks subtlety and a decision to cast cute but histrionic girlfriends for our heroes, further trivialises the piece and leads to some prudish sex scenes. Glinski’s stone-age aesthetics together with over-simplistic dialogue, simply doesn’t do the real fighters any justice. AS

OUT ON GENERAL RELEASE FROM FRIDAY 17 APRIL 2015