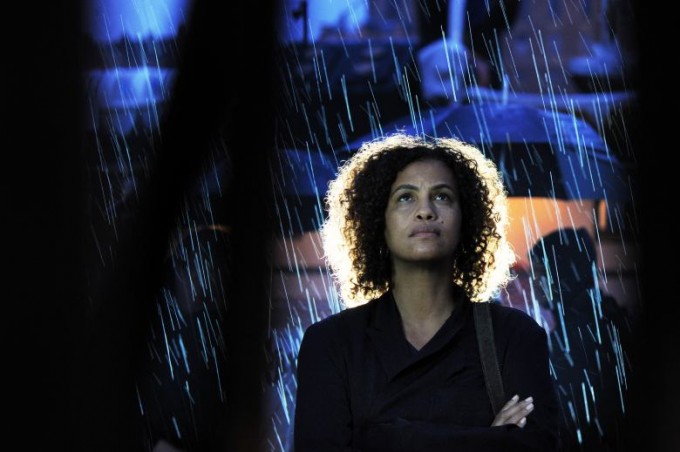 Best known for his 15-hour documentary The Story of Film: An Odyssey, Cousins describes his debut musical feature STOCKHOLM MY LOVE as a city symphony. It is also the acting debut of Neneh Cherry who appears in every frame as Alva, an architect interested in the way our environment effects us – Also known as psychogeography. Cousins has superimposed Alva’s tragic narrative onto her psychogeographic exploration of Sweden’s capital, giving this paean an elegaic and rather mournful feel until the sun eventually comes out and the colours brighten from wintery greys to limpid shades of blue and green, reflecting Alva’s more positive mood.

Neneh Cherry was born in Stockholm in the mid sixties, the daughter of a Swedish textile designer and a Sierra Leonean student who had come to study engineering. Drifting aimlessly through the pallid streets as Alva, memories of her trauma resurface as she tells her (absent) father about the fateful day her car hit and killed an old Swedish man called Gunnar whose dog had slipped its leash and ran into the main road. This terrible event colours her life: “killing you is killing me” she laments. Luckily the dog escaped and is re-imagined eating a ham sandwich on the tarmac.

Alva spends the first hour of the film emoting cathartically to her father as she recollects the sequence of events that lead to Gunnar’s death. And here we are reminded of the unsolved murder of Sweden’s social democrat premier Olof Palme who was gunned down outside a cinema in 1986. Walking down a road of simple two-story houses built in the western suburb of Vällingby (in the late 1940s) Alva explains that Olaf lived amongst the people, and this gives Cousins an opportunity to show where many of Stockholm’s immigrant community also thrive. Compared to London’s streets these are sparsely populated. Attractive low rise buildings with large windows and balconies, often facing a green space, make some of our own council houses look grim in comparison – especially in the light of the grim events of June 2017. The sunless climate rather than the architecture is really to blame for making this place look miserable in Winter, especially for people who have come from much sunnier climes.

Sweden is known for its design excellence enriched by the finance from the Hanseatic League, and Stockholm is one of the few European capitals that avoided bombing during the 20th century’s wars. Contemporary buildings and those dating back to the 13th century associate well in their locations between Lake Malaren and the Baltic sea. Cousins tells how architects returned from abroad armed with ideas from the Islamic world and this is reflected in Ferdinand Boberg’s airy central mosque which has an Art Nouveau flavour and glass chandeliers dating back to its original shell built in 1903.

But what about Alva lifting her mood by wandering round Vallingby’s stunning shopping centre Kfem; the renovated historical brewery now housing Octapharma; Sweden’s very own Flat iron building at Central Station; the light-filled Waterfront conference halls; or the gleaming public swimming and sports facilities at Ericsdalbadet. All of these are fine examples of how public urban spaces can uplift and energise those who use them.

After a hour of Cherry’s ramblings, occasionally enlivened by a soundtrack of classical Swedish music by Franz Berwald, songs by ABBA’s Benny Andersson and five of Cherry’s own tunes, this soul-searching love letter feels somehow spartan and incomplete as a mood-reflecting exercise. STOCKHOLM MY LOVE is watchable but never really satisfies as a psychogeographic study nor as a musical drama. What it provides is a snapshot of a point in time in a road less travelled but as a symphony to the great Nordic town it feels somehow inadequate. There is much more to Stockholm than this bird’s eye view. MT