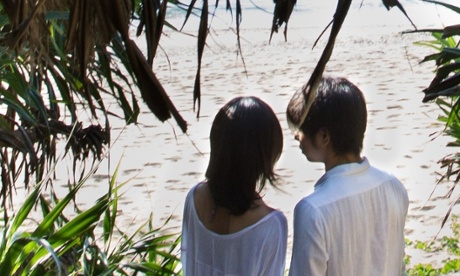 Set on the subtropical Amami Island off the South coast of Japan, there’s a blissful serenity to Naomi Kawase’s tender tale of love, ancient traditions and the healing power of nature that connects to a global narrative of survival for small communities all over the world.

Spiritual, intense and occasionally a tad pretentious in tone, very much in the vein of her previous outing, The Mourning Forest, Kawase explores how the cycles of nature are central to our existence and must be respected throughout our lives. Sumptuously captured on the widescreen and on intimate close-ups by Yutaka Yamazaki (I Wish), particularly magnificent are the aerial panoramas of lush jungles, turbulent sea-swells and the skylines of Tokyo.

Life and death coexist against the backdrop of everyday events and first love for teenager Kyoko (Jun Yoshinaga) and the ‘boy next door’ Kaito (Niijrô Muramaki), who is moody, awkward and emotionally less aware. Kaito’s father works as a tattooist  and is divorced from his mother, a cook. Kyoko’s mother is slowly dying but her spiritual training as a shamen has prepared her to deal with the pain in a dignified and elegant way. In the midst of all this – a dead body floats on to the beach one morning after a heavy tropical storm. There is a vague connection between the drowned man and Kaito’s mother, although Kawase never really clarifies this in her otherworldly-style narrative. Clearly, the trauma affects Kaito’s ability to bond physically with Kyoko.

Exotic and surreal, the sea and verdant scenery has a hypnotic effect, lulling our senses with its gentle piano score and some island ‘Full-Moon’ dances performed by Kyoko and her extended family. Animals, however, do not get the same respect as Nature’s other creatures, and there are two highly graffic scenes of goats being slaughtered that seem to conflict the otherwise spiritual narrative flow. MT