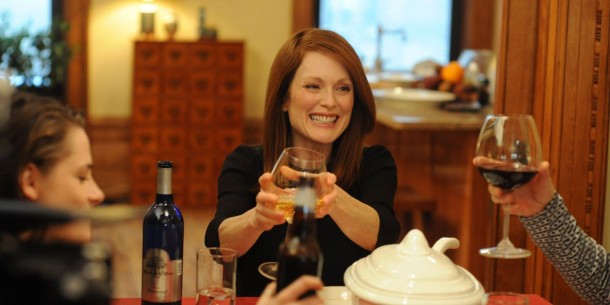 Directors/Writers: Richard Glatzer and Wash Westmoreland      From a novel by Lisa Genova

In an extraordinary year for films about dread diseases, we’ve seen some superb performances so far: Agyness Deyn plays an epilepsy sufferer in ELECTRICITY, and Eddie Redmayne is heading for an Oscar with his portrait of Motor Neurone Disease in THE THEORY OF EVERYTHING. Now along come Julianne Moore, with another winning performance to add to her growing list of best actress gongs.

As a fifty-year-old university professor diagnosed with early onset Alzheimer’s in STILL ALICE, Moore is superb. Cleverly, the film incorporates a generalised and gnawing sense of dread throughout the rest of the cast when we learn that isn’t just early onset, it’s a rare genetic type with a 50/50 chance it will be passed to her children. With a daughter undergoing fertility treatment, which successfully leads to twins, Alice’s affliction leads to a wider sense of dread as the narrative unspools; pulling each member of the family into its web of fear and anxiety. Ironically, Alice and her husband, Dr John Howland (Alex Baldwin), are neuroscientists who specialise in the study of memory. So Alice has the added insight into her condition as it slowly develops.

Alzheimer’s is a condition that everyone fears and part of that fear lies in the loss of control it entails. From being responsible and free individuals we are gradually forced to rely more heavily on our families and, for many of us, this is an added aspect for concern in this world of family dysfunction. STILL ALICE ramps up these fears in quite a sinister way by also exploring how Alzheimer’s is worse when it effects the intellectual mind. These are facts that make the film much more depressing than it needs to be but strangely it fails to be move in the same way as THE THEORY OF EVERYTHING, and for most of the time, it comes across as a film that been made for the Alzheimer’s Society or some Government body.

Undoubtedly, we feel for Alice – it would be inhuman not too, and Julianne Moore depicts her decline in a sensitive and gentle way: where she could have been more angry and bitter, she comes across as appealingly vulnerable. Yet the other characters feels vapid and rather formulaic and the film’s straightforward linear narrative fails to contrast its central story with other engaging narrative strands, making it ultimately feel one dimensional. Alex Baldwin, as her husband is simply terrible. Not only is he weirdly wooden, but it also feels like he’s actually acting in another film (Sleeping With the Enemy) as a break-out psychopath control freak. As her youngest daughter (Lydia) Kristen Stewart is cold-eyed and awkward throughout – and totally lacking in the empathy that you would expect from her character’s role as a budding actress. Kate Bosworth, her eldest daughter, feels flat and uninteresting. Unlike her intellectual parents she behaves like a woman who spends most of her days shopping and reading magazines and this feels totally unauthentic, in the circumstances. So Moore is left to carry the film entirely on her own shoulders, surrounded by a support cast who are, at best, vapid cyphers, and at worst, unappealing. STILL ALICE fills you with a sense of unremittingly gloom throughout; totally unleavened by humour or even pathos.

Alzheimer’s disease currently effects around a million people in the UK. Little is still known about its aetiology and care facilities are poor and underdeveloped. When it strikes, it gradually obliterates our personalities and woe betide those who lack a significant other to look after them as they become increasingly difficult to handle: and they will be. Here we see a woman who has had a successful life and is surrounded by a loving and supportive family. But it totally lacks any humour or, indeed, drama, concentrating on the romantic cheesiness of Alice and her husband and the worthiness of her ‘close’ family., none of which feels particularly believable. As an American film, it may well be that care is fare superior in the States than in Britain. But here the standard of treatment and care is currently pitiful. Where STILL ALICE succeeds is in showing how the individual can cope with the slow decline by taking some early precautions. Alice writes notes to herself on her computer desk top – to be opened when things eventually get worse. It also offers the idea of memory tests: we see Alice performing these exercises daily; keeping her cognitive impairment from going downhill too rapidly. Expounding the benefits of diet and exercise which can nourish the brain.

So, apart from Julianne Moore’s breakout performance, which won her the Best Actress at the 87th Academy Awards, and bringing the plight of sufferers to the international stage, STILL ALICE is otherwise a lacklustre drama which fails to convince, largely down to the unconvincing performances of the support cast. Alzheimer’s is one of the most devastating afflictions of our times and it would churlish to deprecate a film that aims sensitively to raise awareness of its the tragic effects it wreaks on the individual and those that care for them. Nonetheless this is a film that feels worthy and earnest and fails to deliver any great dramatic punch. But it’s nt a film to go and watch when you’re feeling low or lonely or in need of entertainment. It will bring you down, so be warned. MT

OUT ON GENERAL RELEASE