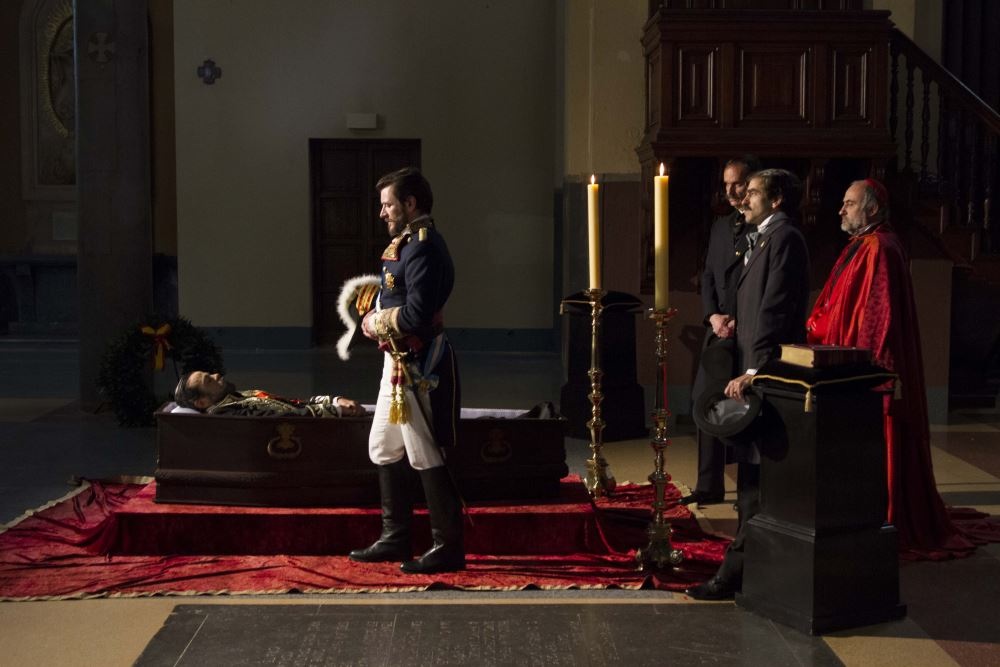 One of the better titles to world-premiere in-competition at Rotterdam earlier this year, STELLA CADENTE (aka FALLING STAR) was a welcome addition to the 68th Edinburgh International Film Festival, where it received its UK Premiere as part of the festival’s ‘New Perspectives’ strand.

Though ‘New Perspectives’ celebrates an international array of work from emerging directors, STELLA CADENTE’s writer-director Lluís Miñarro is no newcomer to the festival circuit. As a producer or executive producer, his CV boasts the likes of Apichatpong Weerasethakul’s UNCLE BOONMEE WHO CAN RECALL HIS PAST LIVES (2010), Lisandro Alonso’s LIVERPOOL(2008), Albert Serra’s HONOR OF THE KNIGHTS (2006) and others. His own first feature-length fiction work is a typically eccentric affair, unfolding at a stately pace and with an exquisite cinematographic flair, but all with a droll, deadpan, throwaway edge.

Suitable form, given the content. STELLA CADENTE tells the tale of Amadeo I, King of Spain between 1870 and 1873, whose unusually brief reign ended in abdication. The brevity of his rule can be accounted for by opposition to the Italian-born monarch’s foreignness, by the fact that his election coincided with the assassination of his most influential supporter, and by the in-fighting that gradually tore apart Spain’s progressive party throughout the latter half of the 19th Century. Compounding matters was the turbulent situation that greeted Amadeo shortly after taking up his position: turmoil among the democrats, conspiracies from the republicans, separatism in Cuba, assassination attempts, uprisings and strikes.

STELLA CADENTE is as timely as it is flippant. Though historical periods are seldom fully analogous, Spain once again finds itself in political and economic disorder, and Miñarro’s film had its first of two public screenings at Edinburgh just days after the ascension to the Spanish throne by Felipe Carlos, following father Juan’s recent abdication. Even at an unjustifiably lengthy 110 minutes, though, STELLA CADENTE eschews the greater intricacies of its historical backdrop. For the most part, it’s instead an unfussily light-hearted affair, featuring musical interludes, tripod-fixed longueurs, matter-of-fact homoerotic desire and the incongruous minutiae of a rococo social class that doesn’t know what to do with itself.

Surprisingly, Miñarro extends empathy and even sympathy to his king. Played by Àlex Brendemühl—blessed with the most amazing peepers in Spanish show business—Amadeo here isn’t as dim-witted as historical legend has had us believe. Advised not to leave his own palace lest he meets the same fate as Maximilian of Mexico, Amadeo seems fully aware that the governmental structure in his “folkloric country” denies justice and freedom. Though hewants to govern Spain, he spends the entire film in listless retreat from all-consuming boredom. In truth, Maximilian I, the Emperor of Mexico, had in 1867 been executed after being betrayed by those closest to him. Of Spain, Amadeo remarks, “This country is full of absurd conspiracies.”

It’s also visually sumptuous. As Amadeo’s wife, Queen María Victoria (Barbara Lennie), remarks, “You know what I love about Spain? It looks like a canvas.” Fittingly, Miñarro’s cinematographer Jimmy Gimferrer shoots in digital chiaroscuro that retains its absorbing clarity and seductive colour throughout. It’s painterly, but it’s also how a child might view things, and kid-like Amadeo, eager to serve his country but never taken seriously enough to be given the chance, doesn’t help himself whenever surrounded by advisors. In his first such meeting, he repeatedly asks if there’ll be a dance or a concert to mark his coronation. Later, his enthusiasm has dimmed: “Ambition is a trap.”

It’s not clear what Miñarro and co-scriptwriter Sergi Belbel’s intentions are here. Any serious allegory or warning cry that might pertain to contemporary Spain is offset by the unnervingly cheery tones, while brief episodes such as that in which Amadeo’s loyal servant Alfredo (Lorenzo Balducci) fucks a watermelon are outright bizarre. Still, it’s perhaps unfair to judge, given the kind of work Miñarro has been drawn to as a producer—adding to those mentioned above is fellow Catalonian Sergio Caballero, whoseFINISTERRAE (2010) is perhaps STELLA CADENTE’s most fitting comparator, as a bonkers journey through time and space. MICHAEL PATTISON