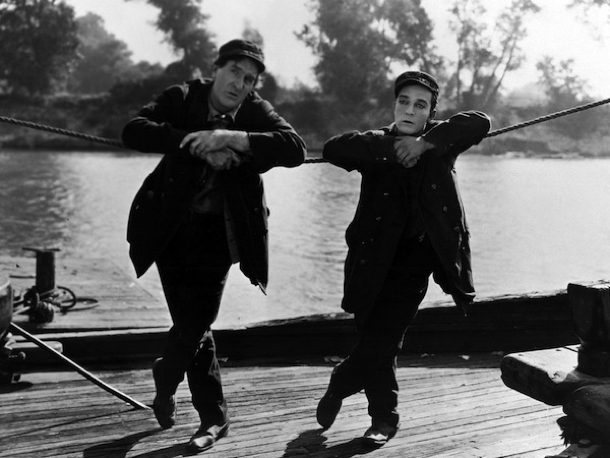 Buster Keaton (1895-1966), known as the man “who never laughed”, was not only the only silent movie star/director who could compete with Charles Spencer Chaplin, he was also a fearless stunt man who was in love with aesthetic innovation: The Playhouse (1921), a short, twenty-one minute silent ‘experiment’, featured not only, one, or two but nine (!) Buster Keaton’s in one frame. In this sparkling new restoration, with a score by Carl Davis and playfully directed by Edward F Cline, he stars not only as the inspirational leader of the vaudeville show but performs nearly all the roles of the characters and the audience. And, being Buster, he has to chase a girl who happens to have a twin sister. Full of visual gags, The Playhouse is still, nearly hundred years later, breathtakingly modern.

Steamboat Bill Jr. (1928) is, with The General (1926), Keaton’s masterpiece of the silent era, before the studios took away his creative control of his films. Here, he plays Bill jr., the son of steamboat captain William Canfield, the latter a burly and robust tyrant who is disappointed that his son turns out to be a meek college graduate. Canfield senior is fighting for his existence while James King, another steamboat operator, runs a modern ship and is taking away Canfield’s customers. To make matters worse, Bill. Jr. falls in love with Kitty, King’s daughter. When a cyclone breaks out, Buster/Billy saves not only the lives of all main protagonists, but jumps again into the water, seemingly avoiding the grateful kiss of Kitty, only to fish the minster out of the sea. Steamboat Bill Jr. was a major production, $135 000 worth of street sets were built, just to be destroyed by the cyclone. In one of his most memorable stunts (often repeated in film-history), Keaton walks along a street, when a whole building façade collapses on him – the cut out of the set just big enough to miss him by inches. Steamboat Bill Jr. was the inspiration for Walt Disney’s Steamboat Bill, premiered six month later, and featuring, for the first time, a hero by the name of Mickey Mouse. AS