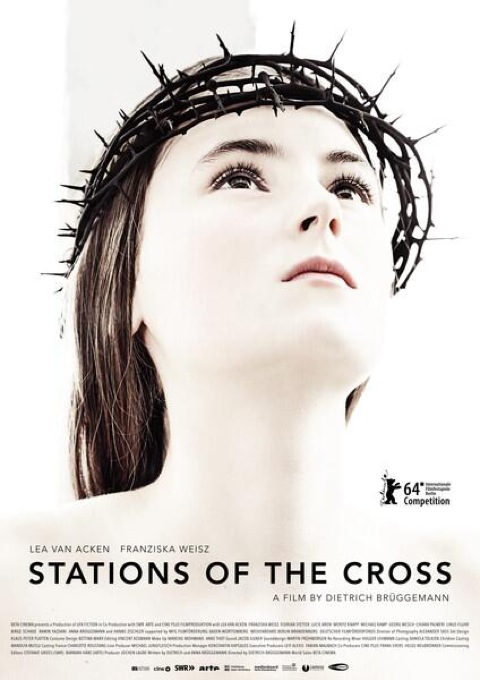 Dietrich Bruggemann’s drama that won Ecumenical prize at the Berlinale this year, centres on fourteen-year-old Maria (Van Acken) who is soon to be confirmed into the Catholic Church. Neatly divided into 14 chapters, each representing a stop on Jesus’s way to Golgotha (based on the biblical text of the Crucifixion) Bruggemann tried not to fall into the same trap of dogmatic anti-pleasure, like the fanatics he attacks. But he only succeeds so far: his didactic way of wringing every ounce out of a scene soon grates in the same way as the long speeches of religious fanatics: not only do they want to do away with joy, they also hate anybody who doesnt agree with them – and are ready to fight every inch of the way.

Pater Weber, the priest instructing Maria and the small group of teenagers in a small German town, is not an ordinary priest but a member of a radical sect, which has split from the Catholic Church. There are claims that the Church itself has been taken over by Satan, since the Second Vatican Council has questioned the existence of the Evil One. Pater Weber wants his flock to follow in the footsteps of a Mexican group of children who fought the “Anti-Christian” government in Mexico a hundred years ago, and were all martyred. Since a contemporary Children’s Crusade is out of the questions, Maria wants to sacrifice herself, so that her mute little brother is given the power of speech. Driven into total isolation by her fanatical mother (Weisz), who teaches her relentlessly to repress any joy in life and to denounce contemporary books, clothes or music as works of the Devil, it seems Maria’s life is set in end in tragedy.

The only person really on Maria’s side is Bernadette (Aron), a French Au-pair, who tries in vain to intervene on her behalf, only to be told by her vicious mother “not to interfere with the education of my daughter”. Maria’s father is totally in the shadow of his wife. One can only wonder what Ulrich Seidl (Paradise:Faith) would have made of this, with his anarchic humour. But the director of  STATIONS OF THE CROSS does not stray from the format of a seventies “Thesenfilm”, were everything has its place: the aesthetics are middle of the road, the images slightly bleached with the camera carefully restricted not to show off anything spectacular; everything is prim and minimalist. Words are the only domineering entity, nothing detracts from the verbal onslaught, and there is nothing to feast on visually. Still, one has to admire the rigour of the script, because this is not fiction. As we have discovered recently, Germany is not the only country with a lunatic fringe, always looking out for enemies and victimising even their own flesh and blood. AS