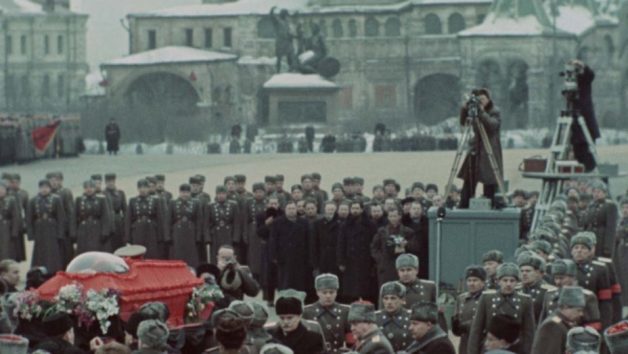 Ukrainian Director Sergei Loznitsa shows how the Russian Communist dictator Joseph Stalin still held his citizens in thrall at the mammoth funeral to commemorate his death. State Funeral concludes Loznitsa’s historical trilogy that started with The Event and was followed by The Trial.

Sixty six years after his death Stalin still exerts a cultish fascination in the West. According to the Yale Professor of History Timonthy Snyder, Stalin killed more people (including Ukrainians) than Hitler killed Jews – 27 million were murdered and 15 million starved to death during his regime (mentioned in the film’s end credits) – but he is still revered by many who espouse Communist ideals in contemporary society.

Expressing a strong opinion is not Loznitsa’s style. He merely ponders the aftermath of one of modern history’s bloodiest dictators with this sombre and dignified documentary that makes used of Danielius Kokanauski’s cleverly edited archive footage to reflect the extraordinary pomp and ceremony that continued for four days and brought the Russian nation to a complete standstill as it wallowed in a sea of mass mourning, the droning voice of the loudspeakers recounting the grim details surrounding the father-like Stalin’s demise.

There is a bizarrely hypnotic quality to this wordless documentary that mesmerises for over two hours as we contemplate the massed crowds moving like silent waves around the casket covered with a shroud the colour of dried blood, known as ‘Kremlin Red’. We can make out the dictator’s children Vasily and Svetlana amongst the morass of floral tributes. Clearly they were numbed by the shock of their father’s sudden death on 5 March 1953 after a massive stroke, in his mid seventies.

Officials are seen relaying the casket on a bier surrounded by a forest of blood and bandage coloured flowers, the lid is removed to reveal the waxy face of the embalmed Stalin as a silent sea of mourners drifts by to the solemnity of a symphony orchestra and massed choir. The restrained remembrance ripples out into the countryside beyond Moscow where millions gather to pay their respects.

After three days of mourning the casket is finally closed and taken on a horse-driven vehicle to Red Square where it will remain on longterm display in the Lenin mausoleum until it is finally sealed in the walls of the Kremlin, eight years later.

The final act is one of inflated speeches and puffed up orations. Nikita Khrushchev is one of the speakers, he would go on to succeed Stalin as first secretary of main Communist Party Committee. Georgy Malenkov, Vyacheslav Molotov and Lavrentiy Beria are also in attendance. Loznitza once again triumphs with this remarkable endeavour that exerts a mysterious power over the audience, captivating despite a 135 minute running time. MT