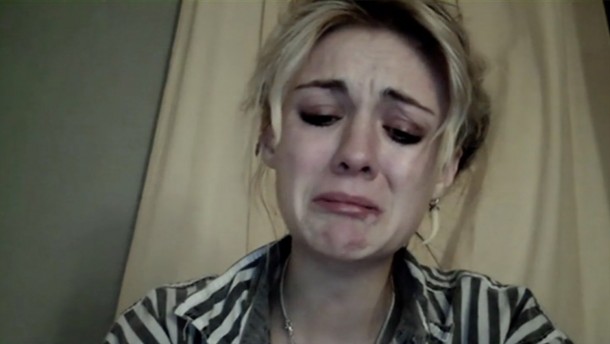 Hailed as the “first selfie movie” or “Hypereal”, director/co-writer James Carver’s debut is more than a gimmick – nor is it revolutionary or innovative.

Cut from a 69 hour shoot in London, Venice Beach, Geneva, Norway and Hastings, it features a cast making use of their mobiles – hacked CCTV camera images are then added to the mix along with hand held camera clips. What makes ♯Starvecrow stand out is not the blend of technology, but the dark content: behind the candidness and their lifestyle dominated by being tech-savvy 24/7, the teenage protagonists hide withering secrets.

Ben (Willens) is a control-freak, charming at first, but we soon learn that his obsession for filming everything with his mobile is a way to manipulate and repress Jess (Walker), who has just returned from rehab. Jess is pregnant, and Ben’s only comment is “get rid of it”. She needs freedom to reflect on her next step, which he is unwilling to give her. When Jess goes with a group of friends to a weekend party in a bungalow near some remote woods, we soon learn that the all these men are only too willing to abuse the girls. There are shades of Blair Witch in the silvan setting, and when the party is gate-crashed by a trio of masked men, things get surreal.
Bookended by a graphic birth scene, ♯Starvecrow tries to shock with its directness, and it succeeds – partly. But overall, the total lack of structure reduces the impact: too often the actors have to explain the goings on. The cast, being their own DoPs, somehow handle both roles more than adequately. In the end, it is the old-fashioned hide-and-seek story which saves the day – technology comes a distant second. But that will not deter countless imitators of trying their luck – alas, they should be warned: Carver succeeded to some degree in spite of his lack of cinematographic know-how, others will not be so lucky, because they will lack the quasi-novelty factor. AS

ON RELEASE FROM 24 NOVEMBER 2017 AT SELECTED CINEMAS