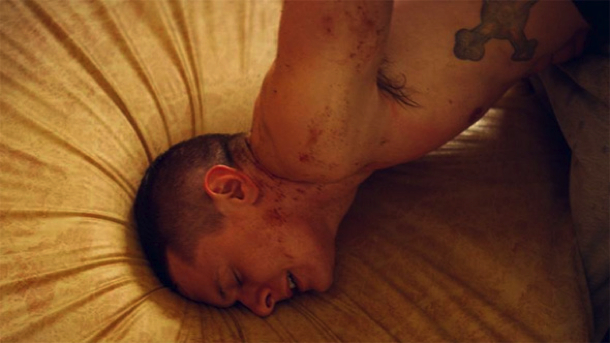 ‘Starred Up is a term used in the British prison system, where a juvenile offender, who is particularly violent is sent to an adult prison, and not a juvenile correction institution. The ‘starred up’ young man in this film is played by Jack O’Connell (The Liability). He lands in the same prison as his father Neville (Ben Mendelsohn), who was more or less absent during his childhood and has his hands full trying to curb Eric’s tendency to violent reactions at the slightest (imagined) provocation.  In a turn of superb strength Jack O’Connell  has to prove his over-the-top aggression from the opening sequences. Oliver (Rupert Friend), an understanding voluntary therapist, whose group Eric joins, tries to curb the young man’s tendency to violent reactions at the slightest (or imagined) provocation, but looses his distance from the men he is supposed to help. After Eric attacks a sadistic prison warden, he has to leave, and father and son embark on another string of unbridled attacks.

It goes without saying that violence is part of any prison film, but Mackenzie here overdoes his share of gratuitous violence and gradually it looses its function becoming the norm in a feature that lacks texture and tension with the dire cinema-verite style accentuating the grittiness: repeating the prison procedures over and over again has a tiring and repulsive effect that distances us from the narrative with the continuously sweary verbal exchanges, become tedious and lack style in comparison with other films of this genre such as Audiard’s The Prophet. The protagonists fall into simplistic categories and are paired up for easy recognition: the sadistic chief prison warden versus the understanding therapist; young, unformed Eric, always on the outlook for violence, versus the more mature father, trying to control himself, at least sometimes. That said, O’Connell and Mendelsohn both give their emotions full throttle in performances of considerable skill.

David Mackenzie is unable (or unwilling) to reign his ideas in and goes completely over the top, losing control of the action because he fails to maintain distance to structure his narrative. There is no grey, only black and white. STARRED UP is self-indulgent; lacks artistic direction, simply stating one argument with the same images repetitively, undermining any message the director wants to convey. The actors are the only saving element of this film, whose grimy, conventional aesthetics don’t help us to connect. Andre  Simonoviescz

STARRED UP IS SCREENING AT THE 57TH BFI LONDON FILM FESTIVAL ON 10, 11 AND 12 OCTOBER AT THE OWE2 AND HACKNEY PICTUREHOUSES RESPECTIVELY