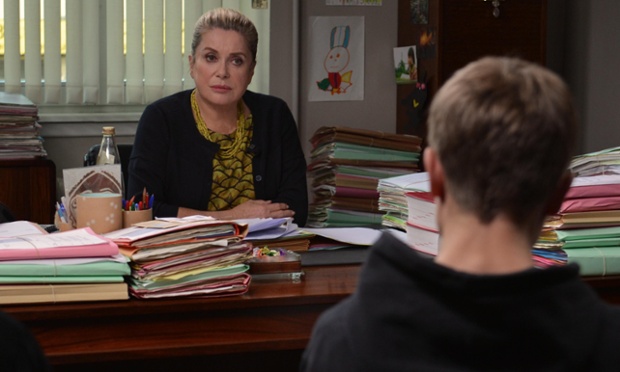 Actress and filmmaker, Emmanuelle Bercot, delivers a thorny and morally complex dramady to open Cannes Film Festival 2015. STANDING TALL has touches of the Dardenne Brothers about it and feels very much like their own slice of social realism, Kid on a Bike, that screened here three years ago.

The boy at the centre of the furore is Malony (Rod Paradot), a fatherless, provincial delinquent whose disadvantaged start in life has made him dependent on the French care system, despite the best efforts of his loving but irresponsible mother. Bercot’s story is in many ways schematic, all along, cleverly injecting sparks of humour and leaving us to make our own minds up about this angry boy, who most of the time feels lost and vulnerable. Bercot strives for empathy for her little anti-hero, but despite some cracking performances from the newcomer and his careworker, Benoît Magimel, (as M Le Vigan) you do come away feeling that this is a boy who “lucks out” in the end despite his shaky start in life that contributes to many vicious attempts to sabotage his helpers, friends and family and the best efforts the Judge in charge of his case – Catherine Deneuve is outstandingly regal here as a woman of moral integrity and professionalism.

This is a positive story that praises the care system in France, showing just how wonderfully dedicated and persevering its functionaries can be, and probably really are, although occasionally it does rather labour the point, outstaying its welcome with endless court episodes and social-worker interviews, that usually end in tears and vicious dust-ups. Although the first hour is full of loud anger and violence, a positive vibe starts to emerge in the second half bringing with it some forced tenderness and more filmic moments from Guillaume Schiffman’s (The Artist) creative camerawork, particularly of the gentle Normandy countryside, where Malony is sent on remand.

Here Malony meets Tess (Diane Rouxel) a girl who is to change his life; and despite a head-butting ‘courtship’ where he practically rapes his love interest, she is to be his salvation. Bercot’s film is full of well-drawn female characters: Catherine Deneuve’s aloof but warmly compassionate Judge; Sara Forestier’s emotionally tender but damaged mother; Diane Rouxel’s long-suffering but tenacious girlfriend and Maloney’s ever-patient teacher, and along with Benoît Magimel’s well-rounded father-figure, they all contribute to Maloney’s wellbeing, making STANDING TALL a positive, feelgood film to kick-off to Cannes 2015.