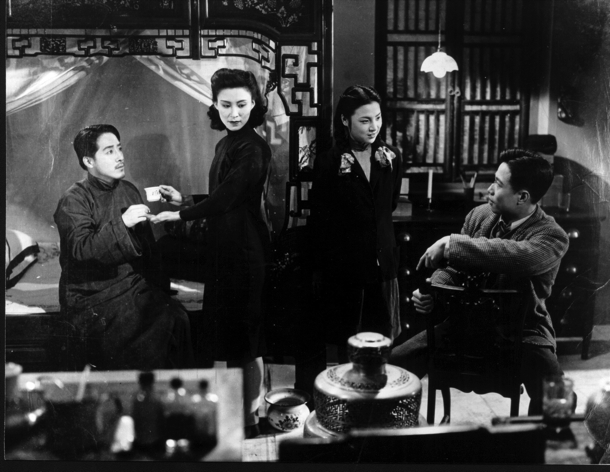 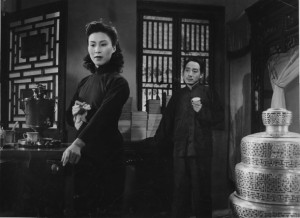 Fei Mu’s post war melodrama Spring in a Small Town is considered one of the best Chinese films ever made and spearheads the BFI’s major exploration of Chinese Cinema that starts on 20 June 2014.

It concerns the delicate intricacies of a classic love triangle between The Husband (Shi Yu), The Wife (Wei Wei in a stunning debut) and The Guest (Li Wei Li) that took place in a remote country town in the aftermath of the Sino-Japanese War. This ‘dilemma of desire’ is very much an affair of discreet ecstasy rather than unbridled lust, as indicated by the formal titles of the characters, but loyalty and decency are the qualities at stake here rather than the personal wishes and sexual fulfilment of the individuals.  The Dai family are somewhat down on their luck and the head of the household (Shi Yu) is now an invalid looking back on a prosperous past and a marriage that’s all but over, but the couple continue to go through the motions. A breath of fresh arrives from Shanghai in the shape Zhang (Li Wei) a childhood friend and now a successful and prosperous doctor. The potent chemistry between the newcomer and The Wife is palpable as she finds herself torn between erotic love and duty. Mei’s central theme here serves as a metaphor for re-building the past or embracing the future.

An enchanting voiceover gives substance to the emotions that the characters feel unable to confess through their shame, adding adding another dimension to this poignant story which is performed with great elegance and lightness of touch. The velvety visuals echo Rene Clément’s wonderful camerawork as the ensemble cast move graciously amongst the ruins of this Post War landscape. It’s clear to see how Fu Mei’s classic was a formative influence for Zhang Yimou, Wong Kar-wai and others. MT

THE NEW RESTORED FILM IS now available on DVD/Blu