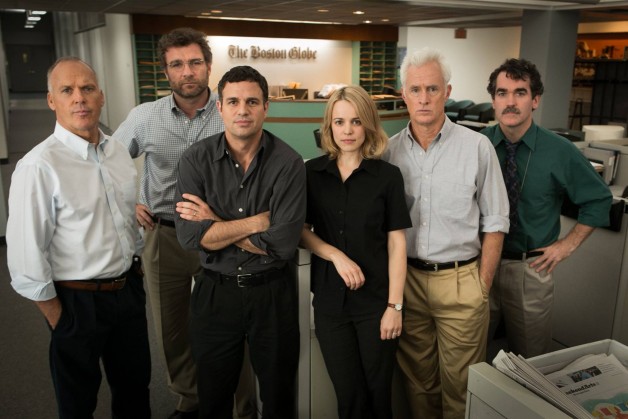 Child abuse is as tragic a subject for the Catholic Church as Christ’s death on the cross. Tom McCarthy delves deep with this candid and intimate-feeling look at a newspaper exposé of one of their child abuse cases.

SPOTLIGHT takes the form of a rigorous and absorbing procedural by a band of journalists – not dissimilar in feel to All the President’s Man or the classical US-TV show Lou Grant (starring Edward Asner as the editor of a fictional newspaper), and  Spotlight has not made any aesthetic progress on this film or early 80s newspaper series. Stringing together ‘ah-ha’ moments from a random list of discoveries, chance conversations and ad hoc encounters until a picture slowly but surely emerges and the audience derives and even savours a palpable sense of conspiratorial satisfaction in uncovering a case concerning the extra curricular activities of nearly 100 Catholic priests’ in the Boston area (and statewide in Massachusetts) that had systematically been concealed by the Church in Boston for over a decade.

Following four senior journalists on the city’s Globe newspaper between 2001 and 2002 – Mark Ruffalo as Mike Rezendes, Michael Keaton as Walter Robinson (the Globe’s editor) and Rachel McAdams, Sacha Pfeiffer – all in relaxed ‘chinos-mode’, they are aided and abetted by experienced hack Matt Caroll (Brian D’Arcy James). Each has a different slant on their reporting but Pfeiffer, in particular, has a pleasant bedside manner and elicits candid confessions from people who had been subtly groomed by members of the clergy of which 50 percent were ‘celibate’ – amounting to around 90 priests: “this was the first time in my life someone told me it was ok to be Gay – and it was a Priest” and from the priests: “I fooled around with them but I never got any pleasure myself”.  But in no way are these revelations sensationalised as they are portrayed as part of the evidence.

Mark Ruffalo is on strong form as an earnest hack who’s like a dog with a bone in his investigating technique – attentive to every single nuance; nothing escapes his gaze as he works night and day on a case that’s unpopular as it’s unsavoury. Keaton plays it sober straight down the line. He won’t take any nonsense “we’re writing a story about the Catholic Church making a cottage industry out of paeodophilia”.

But it’s the The Globe’s new editor is Marty Baron, an unmarried Jewish guy from Florida (making him diametrically apposed to the average Bostoner) who ferrets out the original story and he gives a performance that’s quietly and impressively compelling. As children sing “Silent Night” as the sobering final moments play out. and unfortunately there are no happy endings for this intelligent and absorbing adult thriller. MT

SPOTLIGHT IS NOW OUT ON DVD BLURAY  | VENICE REVIEW 2015