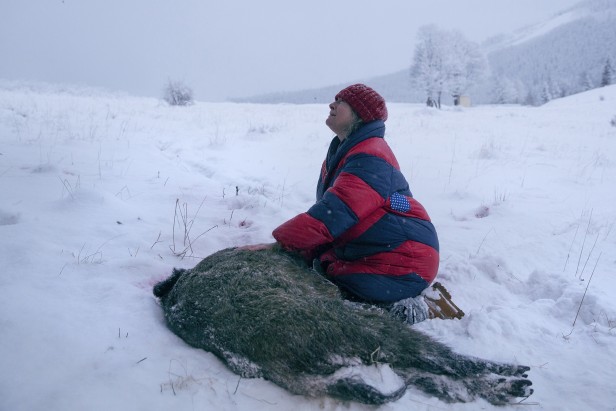 Agnieska Holland returns to Berlin with a harebrained environmental thriller that gets off to a glorious start but gradually wanders way off piste in the snowy mountains east of Wroclaw, on the Polish Czech border.

It follows the exploits of a retired construction engineer turned eco-warrior who has nestled down to a cosy retirement in a pretty wooden chalet where she lives with her two collies, campaigning for animal rights and teaching part-time at the local primary school. .

One day her beloved dogs disappear. On a snowy winter’s night shortly afterwards she discovers the dead body of her neighbour next to some deer tracks. More people die in a similarly mysterious way. All of them were pillars of the village community, and all were passionate hunters, so Janina turns detective to find out what happened.

Initially the kind and cuddly Janina Duszejko’s efforts are laudable but gradually we start to take her less seriously as she degenerates into a tubby troublemaking Miss Tiggywinkle whose emotional outbursts do her cause a great injustice, despite her worthy efforts to find clues. This is a society that glories in killing animals, regales in the hunting season and even celebrates it in the local church, so a careful campaign is clearly needed sensitively to get to the bottom of things.

Ms Holland has been making award-winning films since the 1970s and SPOOR is spectacularly crafted on the widescreen as the camera sweeps across snowy landscapes where scampering wild boar, deer and badgers glory in their native setting. Summery flower-filled meadows and verdant hillsides glow with lush vegetation. This is a feast for the eyes.

So why does she ruin this marvellous opportunity to support animal rights and the anti-hunting campaign with a film based on an unstable earth mother who turns into a nutter, going into battle with her fellow villagers like an unguided missile?. The locals are an unsavoury bunch who delight in skinning animals alive, hunting out of season and gamble and whore openly. To shame them would be as easy as falling off a pine log.

Holland’s script is a collaborative effort based on Olga Tokarczuk’s novel. Clearly Agnieska Mandat relishes the thorny central role and avidly conveys the deep sympathy and anguish animal lovers feel when they witness cruelty. The support cast is poorly underwritten: Boros (Miroslav Krobot) the bug-hunting wayfarer who she beds and bonks; Dyzio (Jakub Gierszal) a young computer guy who suffers from seizures, and the subplot of a girl who is clearly being abused is never explored satisfactorily. All go to make this a sadly missed opportunity for something really resonant and meaningful. What a shame the animal kingdom has been let down. Antoni Komasa-Lazarkiewicz’s sinister score attempts and succeeds in initial gravitas. MT