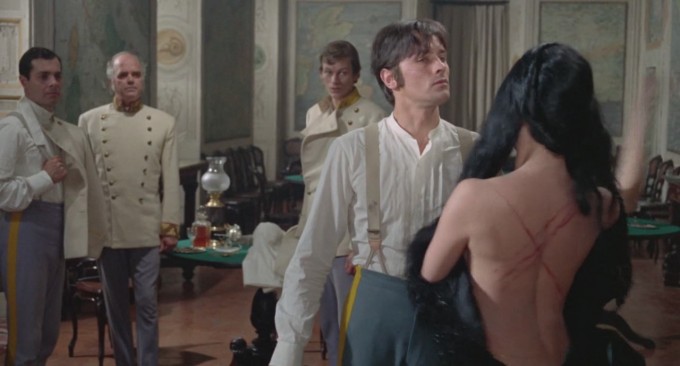 The Sixties was a vintage decade for film and TV adaptations of Edgar Allan Poe. There were over 35 productions. Yet in 1969 a remarkable Poe film came and went with very little recognition. SPIRITS OF THE DEAD is a portmanteau piece directed by Roger Vadim, Louis Malle and Federico Fellini. Allowing directors of other nationalities to adapt American Horror Gothic is fascinating. So what did two Frenchmen and an Italian bring to Poe? Not complete fidelity to the text but undoubtedly intrigue and atmosphere.

The first film Metzengerstein concerns the rivalry between two families and a brief meeting between Fréderique (Jane Fonda) and her brother Wilhelm (Peter Fonda). When Fréderique fails to seduce her brother Wilhelm, she orders his stables to be burnt down. Wilhelm is killed in the fire and his spirit self-incarnates into a wild black stallion. This sounds dramatically promising. Unfortunately Vadim’s direction is so perfunctory that development is ditched for style. He is more eager to show off his actors wearing skimpy ‘period’ costumes (Jane Fonda’s wardrobe used as a trailer for his next Fonda film Barbarella). Only Claude Renoir’s fine photography redeems Metzengerstein, with a magnificently shot sequence of the stables ablaze.

Next is William Wilson. In contrast to Vadim, Malle’s direction is strong and pointed. The film re-works the theme of the doppelganger/alter-ego. Alain Delon is well cast as Wilson, a sadistic army officer. In confession with a priest, Wilson talks about being pursued by a man of his own image and name. Though the film’s chase scenes are gripping, the strongest sequence is the card game between Alain Delon and Giuseppina (Brigitte Bardot wearing a black wig!). Here Malle employs a manner of suspense, comparable to his first film Lift to the Scaffold. This has little to do with the original story but manages to convey, as does the film’s ending, Poe’s perplexing and morbid anxieties.

Finally we have Fellini’s episode, Toby Dammit. This is a genuine exercise in horror. Toby Dammit (Terence Stamp, at his best) is a famous movie actor disillusioned by his work, drugs, drink and the brittle celebrity bubble he lives in. The devil, in the shape of a young girl in a white dress bouncing a luminous ball, keeps following him. All Toby Dammit cares about is when he’ll receive his producer’s present of a Ferrari. However once the car arrives, the devil intervenes. Fellini creates situations both sinister and funny (the film’s full of jokes about cinema and philosophy) engagingly balanced against the set design horror of a broken Dantesque looking bridge and a victim’s blood dripping on a wire. Toby Dammit is a ‘horror of manners’ that is amongst Fellini’s best films.

SPIRITS OF THE DEAD is uneven: Period drama with a psychedelic edge that flounders, gains its balance and then disconcertingly swings forward to black contemporary satire that is  unpredictable, humorous, shocking and occasional visual brilliant. These are not obvious Poe adaptations. I think old Edgar Allan would have approved of their spirit. ALAN PRICE