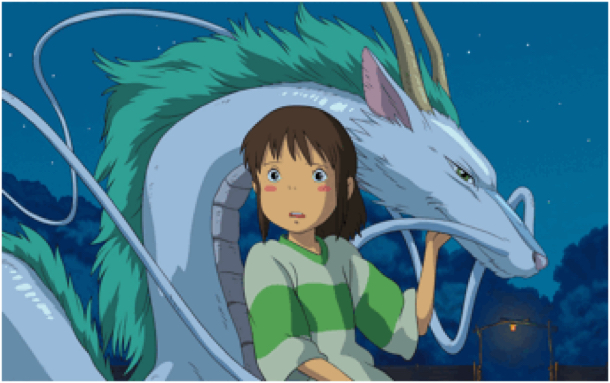 If ever a film deserved to be called ‘fantastic’ it is this one. Even if you’re unfamiliar with animation, you will be enchanted by this wittily perceptive drama from Hayao Miyazaki at Studio Ghibli.  Beautifully hand-drawn, delicately rendered and magical in its conception, Spirited Away is a metaphor for real life in the form of a fairytale for adults and children. Taking us on a fantasy ride to a mythical place of enchantment, its characters feel authentic and are often touched by poignant tragedy.

Miyazaki’s work is borne out of the great Hollywood traditions of Disney but also incorporates references to Lewis Carroll and L Frank Baum, offering up an eclectic mix of styles that feel both tender and intensely appealing on a psycholgical and emotional level.  Dazzlingly lithe and intricate visuals move effortlessly before our eyes with a complete absence of high-tech glitz. Some of the scenes across the lake are so intoxicating that they literally glow from the screen, offering intense pleasure in the enhanced Blu-ray format.

The Japanese family is usually at the core of Miyazaki’s narratives and this one explores a variety of themes from environmentalism and ecological awareness to forging our personal identity in an increasingly consumerist world. Here a professional couple are the proud owners of a smart German car which is transporting them to a new life in the Japanese countryside. But their little daughter Chihiro is devastated by the move and misses her old friends. Gradually the family get lost in the woodland, fetching up in a mysterious psychedelic world where they turn into pigs after eating a huge meal laid out for them. Chihiro is forced into hard labour in a bath house by the wicked owner Yubabu. Her only friend is a slightly older boy called Haku who helps her to restore her parents to their original human state.

Spirited Away won a string of awards on its release including the Oscar© for Best Animated Feature and the prestigious Golden Bear at Berlin. It went on to become Japan’s highest grossing film of all time. MT