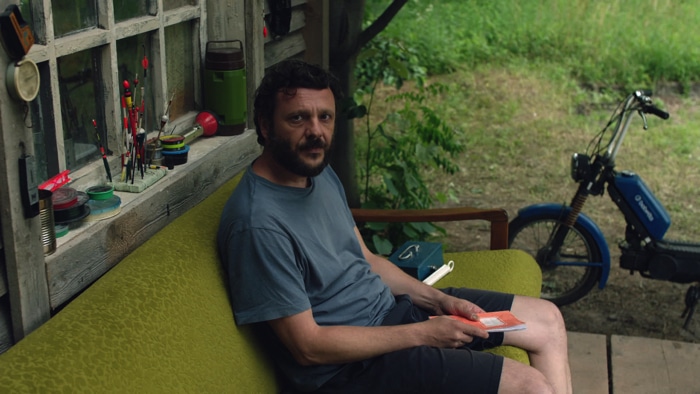 This first feature film by Romanian born writer/director Cecília Felméri is a moody character study about a lake somehow taking on the humans living nearby. Part poetic realism, part nightmare thriller, Spiral is enigmatic and beguiling, haunted by a macabre curse. It echoes the theme in Romanian folklore and literature of purification by fire.

Bence (Dumitrache) is an introverted character whose emotions run as deep as his lakeside dwelling in Szödliget where he lives in a comfortable wooden house with girlfriend Janka (Kiss), trying to make a living as a fish farmer. Lost in his solitary world the lake tethers him like an eerie umbilical cord his father having disappeared nearby long ago without a trace. Nourishing and caring for his prize fish provides him with a strange solace – they voraciously gobble up dead rabbits to birds. But his relationship with teacher Janka is fraught: there is a sexual connection but somehow Bence remains unreachable, lost in a perpetual reverie. Budapest beckons for Janka but Bence is keen to put down roots in their bucolic countryside dwelling, where the only internet connection lies deep in the heart of the lake.

Winter approaches and with it comes tragedy in the icebound lake with its chilly secrets. Bence finds himself alone again with only his ‘piranha-like catfish’ for company and random visits from his aunt (Uhrik) who is told that Janka “simply left” – but we know otherwise. Then government inspector Nora (Borbely) arrives to help him with an application for a grant. The two fall for each other and once again the physical is satisfying Bence then busing her away, convinced that the death of his cat is due to the lake casting a hex on everything he cares about. In a spooky twist Nora develops a penchant for his catfish finding them particularly tasty, possibly due to their rich diet. When his aunt finds with a buyer for the farm, Bence will have to make a decision: does he let the lake win?

Silence and subtle musical choices add to the eerie serenity of the piece which plays out appropriately to Mozart’s Miserere mei Deus. DoP Reder György constructs a magical twilight atmosphere where the lake plays a passive-aggressive entity. What starts as a romantic idyll, soon becomes nightmarish for Bence, haunted by the ghosts of the past. Bogdan plays him captivatingly, his morose enigmatic suggestiveness constantly open to interpretation. In her sophomore feature Felméri directs with confidence, never crossing the line to anything overstated – her subtle approach is rare in a beginner and leaves us guessing and ruminating throughout the film and for a long time afterwards. AS