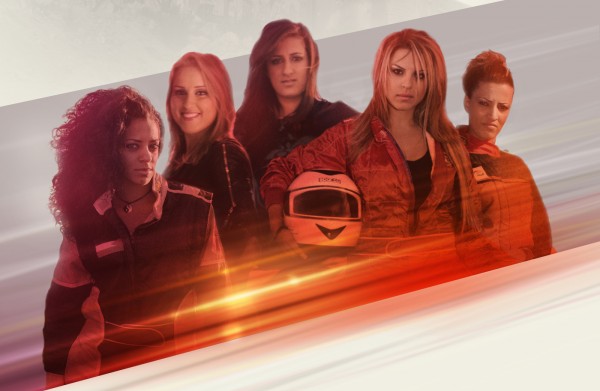 First time writer|directorAmber Fares certainly enters new territory with SPEED SISTERS where five Palestinian women take to the race track; their breakneck fight for the title is as competitive as any men’s race.

Street car-racing is a very male dominated sport all over the world, so it is particularly surprising to see five young women drivers competing in Palestine. Proud to represent her country’s sporting prowess, Fares doesn’t hesitate to show the harsh reality of Israel’s occupation. Marah, who lives in Jenin, is very much supported by her parents, her father Khaled being her biggest fan. Her main rival is Betty, who was born in Mexico, Spanish still being her first language. Betty wins the first championship of this documentary, even though a technical fault on her car should have disqualified her – at least that is Marah’s argument. Betty is very much a modern woman, but also is keen on fashion.  Her statement, “I am not a tomboy” is fully justified, and she has also internalised the commercial rules of the game, being very much aware of being “a brand”.

The racing drivers are managed by Maysoon, who runs a shop and is engaged to a Jordanian, whom she will follow to Amman where they will race together. Marah can’t wait to leave Jenin, bored with “seeing the same faces”. After gaining permits to visit Israel, Marah comments on the differences between Palestine and Israel – only a wall away. Her father Khaled is still nostalgic for the family home near Tel Aviv, which still lies empty since their departure in 1948. Gradually the scenes on the racing circuit take a backseat as this documentary explores the realities of life in the region including the harsh difficulties of filmmaking and shooting in the middle of a war zone. The third act brings a rude awakening as Betty suffers a setback but battles on again for supremacy. Noor emerges as a fierce competitor, making the successful change to compete professionally for Palestine all over the world.

SPEED SISTERS is another superb example of successful low-budget filmmaking. Fares keeps the ‘Talking Heads’ to a minimum and focuses on the action: the struggle between Marah and Betty is as vivid as life on the war torn Left Bank. The camera is literally in the face of all participants and this spontaneity and directness help to engage the audience. SPEED SISTERS, which won the ‘Finders’ Award at he Adelaide Film Festival, is a small but glittering gem. AS