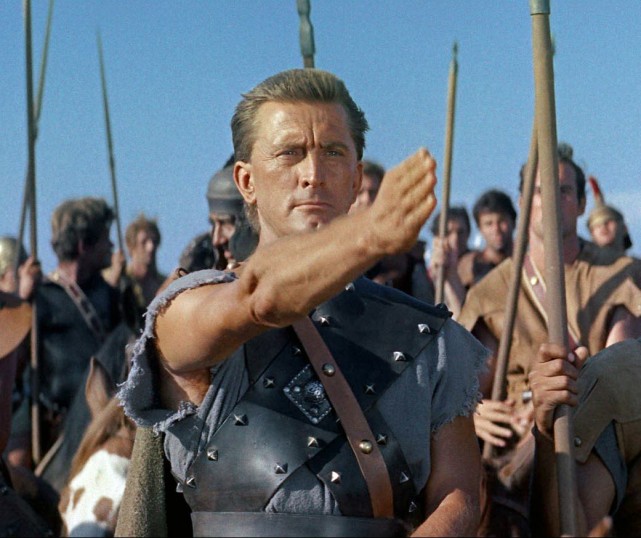 Writer: Dalton Trumbo, based on the novel by Howard Fast

It is purely fortuitous that Spartacus finds itself in the Kubrick collection, as it was Kirk Douglas who had nurtured this film, produced by his own company Bryna, with Kubrick suddenly enlisted at a weekend’s notice after Douglas fell out with and fired his original choice as director, Anthony Mann. The footage Mann shot – the opening scene on the rock quarry – remains in the film. For Kubrick, currently at a loose end having been dropped by Marlon Brando from his projected western One-Eyed Jacks, it represented both the 30 year-old auteur’s first and last contact with large-scale Hollywood production (he settled in Britain in 1961) and the only time he was to function as a director for hire presented with a script, production and cast he had had no say in setting up; with Kirk Douglas firmly in control as a back seat driver. The two went their separate ways on bad terms, and Kubrick would always disparage SPARTACUS; although it’s arguably a good deal better than the films over which he had full creative control after 1970 and – to damn it with faint praise – towers over all the other Hollywood historical epics of the era.

According to Douglas, Kubrick had liked the script by the then blacklisted Dalton Trumbo sufficiently to offer to take the writing credit himself on the film as a ‘front’. Trumbo himself eventually received the sole screenplay credit, based on a 1951 novel written in prison by fellow blacklistee and champion of the underdog Howard Fast. The result is an intoxicating exercise in muscular Hollywood liberalism charting the rebellion against their Roman masters in 73 B.C. by a group of slaves led by the eponymous Spartacus, “dreaming the death of slavery 2,000 years before it finally would die”. The famous finale where Spartacus’ army rally round their commanding officer by shouting out in unison that “I’m Spartacus” was doubtless deeply cathartic for both Fast and Trumbo.

Saul Bass’s monumental title sequence, with the help of Alex North’s pounding music, already tells us that something special is in store; and what follows doesn’t disappoint. In the title role, Kirk Douglas’ broad shoulders provide ample support for the film as a whole, Laurence Olivier is a patrician, English-accented villain in the classic tradition as Crassus, and Jean Simmons glows as usual as Varinia, although given little to do other than provide Spartacus with a happy domestic life between battles and bear him a son. Tony Curtis is also good, if rather too obviously Tony Curtis (right down to his character being called Antoninus). Charles Laughton and Peter Ustinov both enjoyably portray a pair of wily old rogues (the latter earning one of the film’s four Oscars in the process), and Charles McGraw and Woody Strode in particular stand out among the gladiators themselves. Filmed in Super Technirama-70 at a cost of $12,000,000, SPARTACUS was Universal’s most expensive production to date and was the studio’s biggest financial hit to date. It stands today as a monument to classic big budget filmmaking from Hollywood’s Golden Age at its most confident and vital. RICHARD CHATTEN

NOW OUT ON DVD | and AMAZON VIDEO