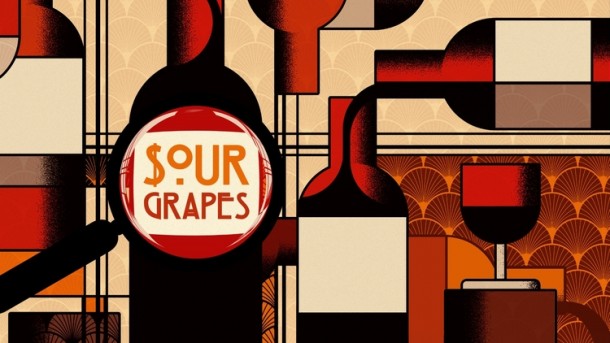 Directors/writers Jerry Rothwell (Deep Water) and Reuben Atlas (Brothers Hypnotic)  investigate a scandal concerning vintage vine and mega rich US citizens in SOUR GRAPES, a mystery worthy of Agatha Christie with its twists and turns. Dosed with a dollop of humour – after all, there cannot be much pity for victims who spend six figures on a bottle of wine – fake or not – but they are still victims and deserving of justice.

This well-crafted documentary opens during the dot-com-boom in the late 1990s, which produced an incredible number of super-rich patrons, vintage wine becoming one of the most sought-after commodities. Novelist Jay McInerney (Bright Lights, Big City) joined the wealthy crowd as a wine journalist – he was one of the first to meet a certain Rudy Kurniawan, an Indonesian businessman of Chinese heritage, born in 1976 – a man with a yen for vintage wines and impressive manners. His background was slightly murky but his opulent wealth was family-related: his father ran the Heineken franchise in China, and gave his son a cool yearly allowance of one million US Dollars. Kurniawan’s wine cellar was legendary, and between 2003 and 2006 bottles worth more than 35M$ were sold, often in auctions at Christies, but also at Acker/Merrall/Conduit in New York, where Rudy’s auction of his wine fetched 24.7 M$ in 2006 – a new record.

But Rudy’s luck – his clients included the Hollywood producer Arthur Sarkassian (Rush Hour) and film/TV director Jef Levy (Inside Monkey Zetterland) – would run out soon: mainly, because in far away Burgundy, Laurent Ponsot, wine producer, discovered, that Rudy had forged labels, corks and content of his most famous Wines from the Côte d’Or. And closer to home, industrialist Bill Koch (brother of the infamous arch-reactionaries Charles and David), had put Ex-FBI agent Jim Wynne on to Rudy, after discovering that he had paid several million Dollar for counterfeit bottles. But there is much more here than initially meets the eye.

SOUR GRAPES is a slick documentary that plays out like a crime caper in a luxury environment. Rothwell and Atlas show Kurniawan very much at home in this world: basically playing a shell game, always borrowing just more than he would spend on his own luxury equipment, needed keep up the front. As fine wine consultant Maureen Downey states: “The overwhelmingly male-dominated field of the highest-end collectors is fuelled by “F.U.” money, a kind of money most humans never experience; it is a world of swagger, camaraderie and one-upmanship, in which the participants have more in common with James Bond than Richie Rich”. The  documentary is awash with archive footage showing Rudy very much at home in an environment where over 40, 000 fake bottles sold by the man ”who revolutionised the market”, are still in the wine cellars of his friends and clients. Watchable and intoxicating. AS

OUT ON GENERAL RELEASE from 16 SEPTEMBER 2016 COURTESY OF DOGWOOF