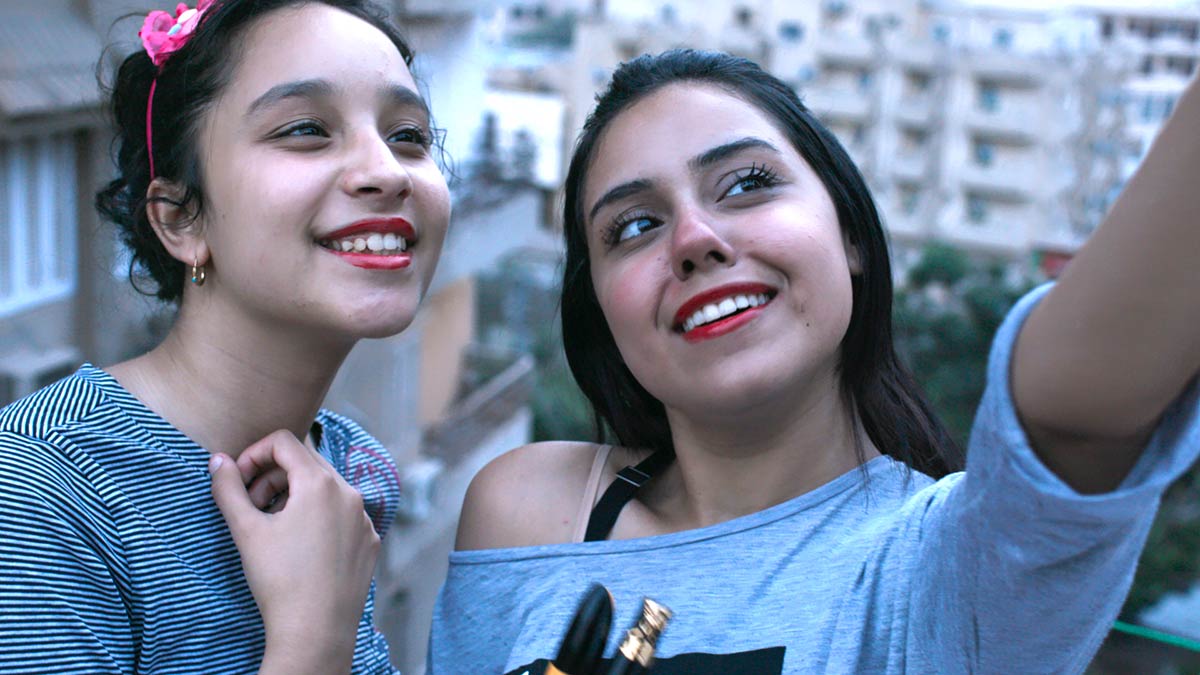 Egyptian director/co-writer Ayten Anin (Villa 69) offers a snapshot of the younger female generation symbolising all the contradictions of Muslim countries like Egypt, where their modern world is on collusion course with the more traditional background of their families. Amin has her narrative structured in chapters, the headings go with the main protagonists.

Chapter one, named after the titular heroine, nineteen-year old Souad (Bassant), begins in a commuter bus where Souad tells a woman seated next to her all about her fiancé Ahmed who is serving in the army, a fact that frightens her – but she can’t wait to get married and loves his family.  Next, she is in another bus with another woman, and this time Souad’s fiancé is still Ahmed, but this time he’s a surgeon in Cairo, and Souad herself is studying medicine, coming from a family of doctors.

The reality is very different, when we watch Souad in the small flat she shares with her younger sister Rabab (Elgaiesh) and her traditional parents (Shalaby/Elnamoury). They live in Zagazig, a fraught industrial town. Souad and her girfriends Yara (Ackad), Amira (Shedid) and Rabab are addicted to their mobiles – to the exclusion of nearly everything else.

Souad likes to flirt, particularly with the rather wild Wessam (Mahmoud), but her true love is Ahmed (Ghanem) although he lives 300 miles away in an upmarket part of Alexandria. Ahmed is a budding influencer on the insta, and the two share photos and poems, even engaging in phone sex. They will never meet, because Souad, anxious about her exam results, throws herself from the balcony of the flat.

For her parents it’s enough that she died a virgin, the rest is “God’s will”. Basically, the feature starts again when Rabab, who has inherited Souad’s mobile, travels to Alexandria to meet Ahmed, to “give him a present from Souad”. Rabab falls for Ahmed’s charm, just like her sister, but at only sixteen she is more realistic, far too young to have a fiancé. Ahmed is now betrothed to an upper-class girl from a leading family but he’s decent enough to admit to Rabab that he did love Souad although she well aware of the situation. Ironically, she passed all her exams.

Souad’s confabulations are not uncommon for a young woman of her age, but is also clear, that she – and her friends – are used to living in a parallel universe, where shopping with her mother for a new hijab, collides with her activities on the mobile. What is also pivotal is the lack of understand about her depression. The friends’ rivalry is certainly part of it – they argued about the use of cosmetics to make them look whiter, among other issues. But rather than explore her psyche Amin is more interested in the impact her death made on her family and friends. What is crucial here the affects of societal repression on a whole generation of young Muslim women in countries dominated by a male-orientated religion.

The ensemble acting is brilliant; Ahmed and Elghaiesh won joint “Best Actress” at Tribeca this year. DoP Maged Nader excels both in close-ups and a roaming camera in the cities of Zagazig and Alexandria, underscoring the social divide that impacted on Souad’s wellbeing. Ayten Amin directs with great sensibility in this moving expose of Arab society. AS