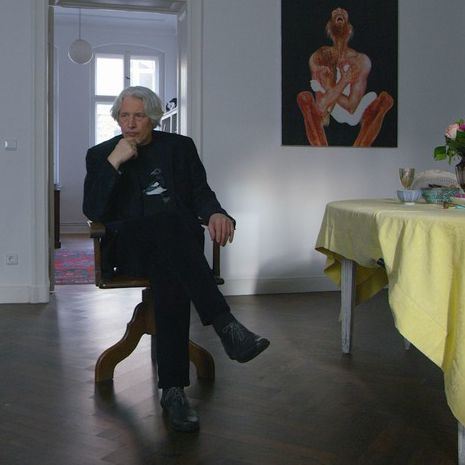 Director Ilya Belov (Brodsky is Not a Poet) and writer Anton Zhelnov have painted a lively portrait of prolific Russian underground artist Vladimir Sorokin (*1955), who has markedly calmed down since setting fire to Soviet literary tradition and building his own world on its ashes. He now lives in Moscow and Berlin, hugging trees and believing in God.

Sorokin who grew up outside Moscow, had the misfortune to be the only student in his class whose parents had a higher education. He was physically bullied, but refrained from retribution. His emotionally cold father had mental health issues,, his mother trained as an engineer but retired at 35 due to ill health. Sorokin first published in a newspaper: ‘For the Workers in the Petroleum Industry’. But he went on to make his living illustrating books, and was one of the leading figures of Soviet Underground culture. Like many students all over the world, he skipped lectures and enjoyed provoking the authoritarian Soviet establishment, which fell for his stunts, which were nowhere near as radical as the Underground scene of New York.

Sorokin draws most of his inspiration from Fine Art, and is an accomplished painter. His first publicised book was Ochered (The Que) in 1983; his most famous novel Den Oprichnika (Day of the Oprichnik) in 2006. It describes a dystopian Russia in 2027, when a Tsar rules in the Kremlin. The ruler has a “Great Russian Wall” built, separating the country from its neighbours; with Sorokin positing that he wrote this all before Brexit. His plays include “Dostoevsky Trip” (1997), whilst his libretto for the Opera “The Children of Rosenthal”  caused uproar at the Bolshoi Theatre, watched by the author and his twin daughters.  Sorokin’s novella ‘Blue Bacon Fat’ (2002) drew the ire of not only the authorities, Putin’s men inflamed the affair by in a massive book-ripping event that carried the slogan ‘down with pornography’. The courts got involved, but the matter was dropped due to lack of evidence.

It is a shame that Belov concentrates so much on the confrontational nature of Sorokin’s output, his juvenile posturing is hardly worth the time. After all, Sorokin has written eighteen books, ten plays and four film scripts, among the Rotterdam Winner Four (2004), which was directed by Ilya Khrzhovsky. DoP Mikhail Krichman does a much better job, keeping the audience interested with his free flowing images, somehow capturing the soul of the writer much more than Belov’s overly verbose outpourings. Overall Sorokin Trip does Sorokin a disservice. Thi is an underwhelming biopic, not because of its main subject, but because Belov tries too hard to match the antics of the young author and creative genius. AS