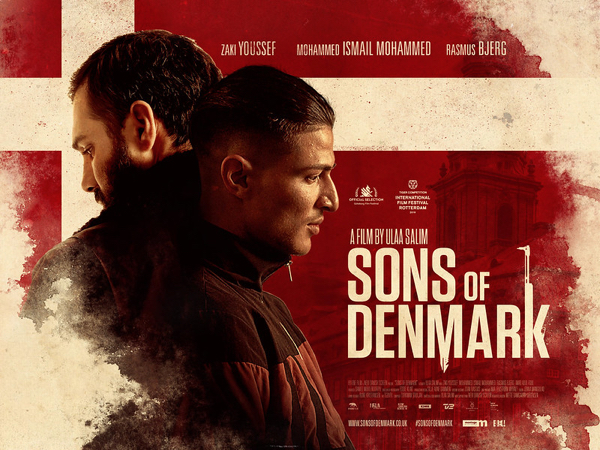 Judging by his debut feature Ulaa Salim is clearly a better director than a screenwriter. Although didactic and melodramatic at times Sons of Denmark is certainly a rollicking ride through radicalised Copenhagen with a game-changing twist that takes us all by surprise.

Set in the near future after a bomb attack in Copenhagen has claimed twenty-three lives, we witness 19 year old Zakaria (Mohammed) and his mates drifting into radicalisation when the populist right-wing politician Martin Nordahl (Bjerg) enters the  forthcoming general election – with a manifesto that pledges a purge on immigration.

Zakaria’s mother and little brother, once the centre of his life, now means less and less to him. Neighbourhood elder Hassan (Abul-Foul) knows how to channel Zakaria’s unrest, and this involves the experienced Ali (Yousef) who is going to train Zakaria to join the jihad. Their target is none other than Nordahl whose poll figures are climbing. But when Zakaria enters Nordahl’s flat, the police are there waiting. And the young man soon learns the truth about Ali in a striking volte face.

Salim handles the domestic scenes and the action sequences with impressive aplomb,  supported by first time DoP Eddie Klint, whose widescreen images are a startling reflection of the desperate state of things in Denmark. Bjerg’s Nordahl is just the right mixture of bully and seducer: his simplistic “send-them-home-message” is very seductive, he has graduated from a street-fighter to TV personality. Back in the day TV main news wouldn’t have given him credence, but now he is fawned over by most of the media.

Sons of Denmark would have worked even better as a TV mini-series: there is so much to say about the main characters, particularly Ali. And Salim is also a revelation with plenty of tricks up his sleeve, with his score incorporating the ‘Lacrimosa’ from Mozart’s Requiem, underlining the emotional upheaval of a suffering society. By no means perfect, but still an impressive debut. AS

ON RELEASE NATIONWIDE FROM 6 DECEMBER 2019