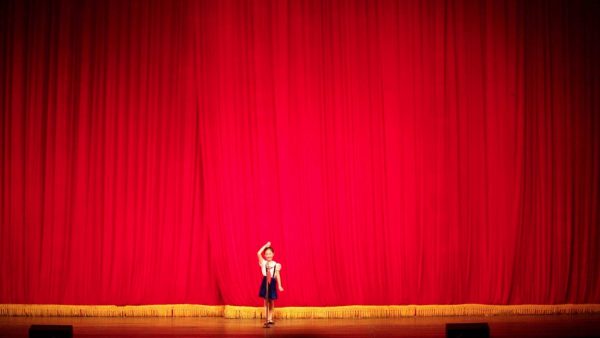 Born 1962 in South Korea, Yoo Soon-Mi studied in the USA, where she now lectures at MassArt in Massachusetts. This is only one example of an attempt to understand her divided homeland, and follows her 2005 short film on the subject Dangerous Supplements that uses footage from American fighter planes bombing North Korea. This is an attempt to look for a landscape that seems to drift away. For Yoo, the film “is an incomplete index for the memory, a substitute for a vision that is yet to be born.”

This vision was finally realised in Songs from the North, that describes North Korea as  “the loneliest place one Earth, the country has no friends, no history, only myths, repeated endlessly from morning to night”. But for the filmmaker North Korea was always the elephant in the room, a country she wanted to visit for a long time “a land of evil that is scared as a mother’s womb”. During her three visits to the North, what emerges is a collage of interviews, film and TV archives. The masque of slips but only briefly surround the slipping but only briefly from the world’s most secretive nation.

Dedicated to her father Yoo Young-choon, whose comments to camera provide integrity and ballast to this intriguing essay film, Soon-mi Yoo does her best to maintain distance from her first person account that manages to offer insight into the culture and general ambience of this lonely state with, apparently, few friends. She visits Pyongyang and the surrounding area where white-gloved officials take pride in their marching displays, much as they do in mainland China. On the whole people seem relatively chipper with their lot, clearly they don’t know what they’re missing but is their ignorance bliss or simply a sinister form of brainwashing?.

Her excursions were heavily censured, often we hear her ‘handlers’ shout “no filming” or “stop”. At one point a man literally runs away from Yoo shouting “filming too long”. But Yoo stays true to her opening shot, were high-wire acrobats at the circus, one of them abruptly falling into the safety-net, destroying the illusion of a perfectly functioning display. Yoo is looking for moments when the citizens drop their mask for a moment; when even the awe-inspiring, official version of life comes to a halt: a group of bearded men in a billiard saloon, seen through the beads; a traffic cop on night duty, again indirectly captured through a bus window, restaurant employees cleaning up the place, whilst asking Yoo if it was worth filming at all.

Her father had fought as a young man in the Korean War. Afterwards, most of his friends, convinced that communism was the future, emigrated to the North, where they all perished in brutal purges. Yoo directly asks her father to camera, if he shared the political convictions of his friends. And after a pause, he is affirmative, concluding that only the love for his mother kept him back. He goes back in time, criticising the North Korean regime for its failures from a Marxist point of view: communism is built on economic success, but the regime has never come to terms with it, instead it went for personal politics, which are just the super-structure.

The official State Propaganda pieces are hilarious: huge halls, decorated in Soviet-style of the 1950ies, are filled to the brim. On stage, a North Korean version of a young pioneer exclaims the great leader (which ever Kim was in power) loves him like a father and a mother. Whilst his own mother died of shame on account of his father’ treachery to the nation, the great leader forgave him. And there he is, singing the praises of Kim, and making him forget he is an orphan: his pride in representing the leader in public is the highest honour.

Another TV production talks about Japanese soldiers losing the will to fight when resistance fighters sang the praise of the first Kim, who is credited with getting rid of the Japanese invaders. The death of Kim Il Sung was too much to bear for the country’s citizens. Hysterical collective weeping is showcased as a major attraction. Afterwards soldiers berate their wives for their lack of patriotic engagement. All this against the background of a wintry Pyongyang, dreary as it can be. All TV programmes somehow look as is they are shot from a different planet, even though the regime is credited with sending a communications satellite into space, at no point do we believe that we are in the 20th or 21st century.

Elegantly structured, the film conveys the feeling of utter solitude. The tone is melancholy, modest even, but still a corrective to our first hand knowledge, because Yoo never stops wanting to learn more about this hybrid state: she confronts it with glaring truth, but she never forgets that it is still the sibling of her, and her father’s, homeland. AS