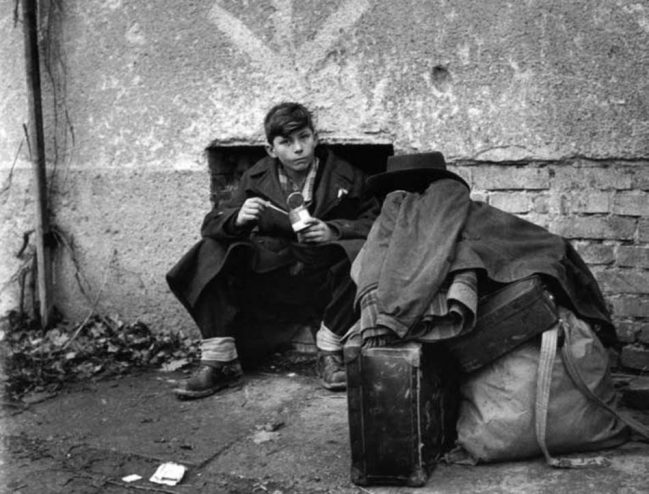 At the end of the Second World War Eastern Europe was in a terrible state with orphaned, homeless children roving aimlessly around the countryside and on the banks of the Danube. These starving and abandoned kids get together and form a gang as they gradually lose their humanity and sense of decency in this remarkable black and white drama from Hungarian director Radvanyi.

Set on the widescreen and in intimate close-up, this visually thrilling Agitprop was financed by the Hungarian Communist Party and released in 1948 when the country was already fully committed to the new regime. With its crisp framing crisp framing and chiaroscuro lighting the film conjures up the pervasive desperation bordering on mania of these deprived kids,

Somewhere in Europe was considered the first triumph of Hungarian cinema in the aftermath to the War, it certainly trumps Ken Loach’s sloppily put together propaganda outing I, Daniel Blake and avoids sarcasm in favour of a message of solidarity – though quite why the French National anthem features here is a mystery. The early scenes are largely silent and set to Szabolc Fenyes’ rousing orchestral score which highlights moments of tension throughout, although the melodrama remarkably restrained, even when tragedy strikes. The cast of child non-pros give naturalistic performances that are convincing and really moving. And there is a subtle love story that plays out between Hosszu and Eva (Szusza Bánki), a young woman who reveals her tragic past in flashback.

Led by their gang leader Hosszu (Miklós Gábor), the kids discover an abandoned castle where a middle-aged conductor Simon Peter (Artur Somlay) is hiding in solitude waiting for peace . After trying to hang Peter – the kids are like something out of Animal Farm such is their starvation – they gradually befriend him while he serenades them with piano classics, persuading them to mend the leaking roof. He also teaches them the lessons of life.

United in a common cause, and reminding us that Europe is still in flux migration wise, they eventually join forces in defending the castle against a group of villagers who call Peter the ‘mad musician’ and plot to storm the castle with disastrous consequences for the kids and their new leader. Despite its sinister overtones, the film carries a message of hope that proves that a community spirit and small acts of kindness are the always the way forward, and can actually lead to redemption, even during Communism!. MT