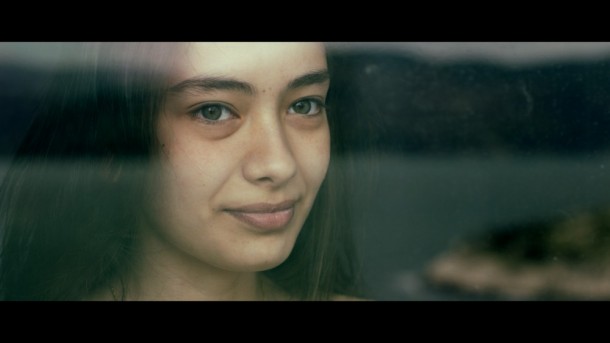 Another Anatolian story this time set in contemporary Karabuk, an industrial town that seems an appropriate location for its title, literally meaning in between heaven and hell or limbo. Yesim Ustaoglu tells her story of frustrated dreams and hopes in the middle of a snowswept winter where two young people are stuck in dead-end jobs with grueling schedules and long commutes.

Yesim Ustaoglu is a well-known filmmaker in Turkey and has had success with previous features Pandora’s Box (2008) and Waiting For The Clouds (2003) both focus on the human condition seen through difficult circumstances.

Here in Araf, Zehra (Neslihan Atagul) and Olgun (Baris Hacihan) are drawn to each other, attraction serves as an antidote to their monotonous lives. Then Zehra meets Mahur (Ozcan Deniz) at a wedding and the two become close but face considerable problems due to societal pressures. What follows is an unflinching portrait of a woman trapped in time and place with little choice or personal freedom. As Zehra, Atagul’s is convincing and believable as she scales the highs and lows of her emotions in this cultural backwater.

Yesim Ustaoglu is undoubtedly a talented filmmaker. That said, her latest film is too long and tonally monotonous to sustain such emotionally demanding subject matter. Araf would have had more impact with the benefit of judicious editing and tighter scripting with the inclusion of some lighter moments to contrast with the gloom. MT